What is the deal with Ronan Farrow? He is the son of Woody Allen and Mia Farrow, and famous for writing MeToo stories. Allen is the world's most famous neurotic Jew, who described his peculiar sexual attitudes in his movies. Nutty as he is, he is a model citizen compared to the lunatic Mia Farrow.

Ronan Farrow's new book says he is gay, and "engaged" to his 8-year boyfriend, a Jewish Hollywood writer. He had a bizarre childhood, and may never have been on a date with a girl. Yet somehow he is the one to pass judgment on what male-female sexual relations are supposed to be.

Ronan appears to be severely psychologically damaged. He refuses to say whether Woody is really his father. His mother induced his adopted sister to invent a wildly implausible allegation against Woody, in order to support her child custody dispute in court. He says:


FARROW: So one of the threads that runs through the book is my sister's courage in maintaining her claim year after year, including at times when people really refused to hear her out, ... And, you know, I wanted to be honest and vulnerable, Terry, about the fact that I was not always heroic in my conversations with her, you know? ...

But over the course of this book, I do come to an understanding that I was wrong and she was right. And her claim was credible.

How does he figure out who was right by writing a book on another subject 25 years later?

If you want the sordid details, read Wikipedia on Woody Allen sexual assault allegation. I think that it is obvious that Allen is completely innocent, but decide for yourself.

But Ronan doesn't seem to be even talking about what really happened. He seems to be just saying that the girl told a plausible story, and others were wrong not to validate her feelings.

So now he is on the warpath against heterosexual Jews like his father, and Harvey Weinstein. 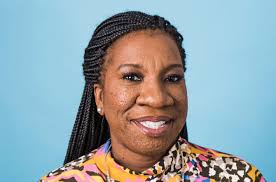 Ronan did not start MeToo, as that is credited to Tarana Burke. She is a 46-year-old black woman with her own rape stories. There do not seem to be any police reports, so it is not clear whether she was a victim, or if she just believed in saying "me too" as a way of supporting other women with rape stories.

She is another damaged weirdo with her own personal issues.

Maybe I should call them jokers, after the recent movie about a crazy man who never recovers from a disturbing childhood.

What these jokers have in common is that they do not distinguish fact from fiction, rape from sexual harassment, and sexual harassment from bad dates. They pass judgment on the behavior of others, while they seem to have no idea what normal human relations should be.
Posted by Roger at 8:00 AM