The Lie That Just Happens

A Seattle paper reports about a man suffering a false rape allegation:

The Sheriff's department has staff who are specially tasked with determining whether or not an alleged victim is credible. A woman in the department sat down with the girl and carefully listened to her story to evaluate its veracity. That officer came away convinced. So did the department's sketch artist. For the next week, police issued press releases describing the incident and the truck. Using the girl's description, the department distributed an image of a man with wide-set, droopy eyes and long stringy hair. News outlets, including this one, posted it to their Web sites.

Likewise, Bekele's accuser also underwent a joint interview with prosecutors and investigators, and also came off as credible, according to Ian Goodhew, deputy chief of staff in the King County Prosecutor's office. That's why prosecutors decided to file charges in the case.

Susan Shapiro Barash, a gender-studies instructor at Marymount Manhattan College whose book, Little White Lies, Deep Dark Secrets: The Truth About Why Women Lie, was published last year, says women who choose to lie do so in part because they're good at it. "We're raised to tell little white lies," Barash says. "Part of the reason women can lie about something big is because they've been taught to lie about small things."

The accuser got busted when someone noticed that she had forged some emails. No motive for her false accusation was discovered. She agreed to get counseling.
Posted by Roger at 9:00 AM No comments:

CHICAGO – Children on medicine for attention deficit disorder scored higher on academic tests than their unmedicated peers in the first large, long-term study suggesting this kind of benefit from the widely used drugs.

Children's scores on several standardized math and reading tests taken during those years were examined. Compared with unmedicated kids, average scores for medicated children were almost three points higher in math and more than five points higher in reading. The difference amounts to about three months ahead in reading and two months in math, the researchers said.

Both groups had lower scores on average than a separate group of children without ADHD. The researchers acknowledged that gap but said the benefits for medicated youngsters were still notable.

It is no surprise that kids on stimulants do better on tests than kids who are not on stimulants. Everybody knows that. People drink coffee for a reason.

It would be more interesting if it could be shown that the ADHD drugs somehow help ADHD kids more than they help other kids. Or if it were shown that ADHD drugs were more effective than coffee. Otherwise, I don't see that these studies show anything useful at all. Maybe we would be better off just giving coffee to all the kids.
Posted by Roger at 8:00 PM No comments: 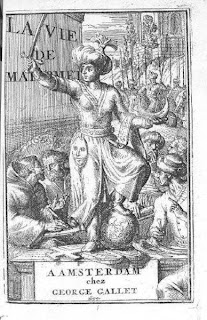 This illustration is taken from ''La vie de Mahomet'', by M. Prideaux, published in 1699. It shows Mohammed holding a sword and a crescent while trampling on a globe, a cross, and the Ten Commandments.

I found it on Wikipedia.
Posted by Roger at 10:32 PM No comments:

A businessman has been cleared of raping a university student after jurors were shown footage of the sex session taken on a mobile phone.

Gary Taylor, 41, was accused of attacking the 27-year-old woman after turning up at her flat with cocaine and a bottle of red wine.

The woman, who can't be identified for legal reasons, told jurors that Mr Taylor forced her to perform a sex act on him and then raped her in her living room.

But during cross-examination she was shown footage Mr Taylor had taken on his mobile phone during the encounter on September 26, 2008.

I guess that there is no free speech in Britain. I can understand keeping the names of rape victims secret, but this woman is not a victim. Taylor is a victim of a false accusation. It would be better for the newspaper to name her and not him.
Posted by Roger at 4:00 PM No comments:

Manitobans who come across child pornography must now report it to authorities.

As of Wednesday, the province became the first in Canada to make it mandatory for anyone who suspects the existence of child pornography -- online, in books, photographs, or other audio and visual materials -- to immediately report it, Family Services Minister Gord Mackintosh said Wednesday.

The food police are closing in on their next target: a soda tax.

Persuading Americans to regulate soda the way we regulate cigarettes won't be easy. Isn't soda a kind of food? Isn't food a good thing? And isn't it a matter of personal choice? Doesn't taxation to control people's eating behavior cross a fundamental line of liberty?

In their article, Frieden and Brownell methodically attack these objections. Going well beyond science, they lay out a political battle plan for the war on junk food.

Step 1 is to convince us that soda isn't really food.

The evidence for soda being unhealthy is pretty thin. There are some papers saying that it contributes to type 2 diabetes, but I'm not sure that it is worse than any other sugary food. Diabetics do have to control their sugar intake, and can have trouble if they eat too little or too much.
Posted by Roger at 9:45 AM No comments: 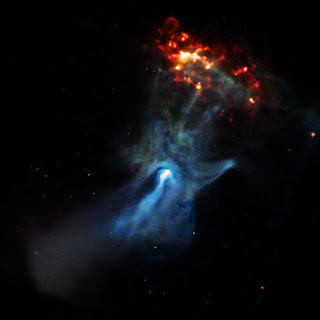 This is a real image from outer space, with false colors. (Xray wavelengths were mapped into visible colors.)
Posted by Roger at 9:45 PM No comments:

Google warns against its own service

I just got this message from my Google Chrome browser. Google owns Blogger.com, and it is the service I use to post these message. They have a bug.
Posted by Roger at 9:16 PM No comments:

Best interest of the economy

Jon Stewart asked Nancy Pelosi how he can get some TARP money, and asked about the allocation rules. She answered:

That is a Treasury Department decision, and that's what's in the best interest of the economy, they tell us.

Now there is a meaningless phrase. Since when does the economy have its own interest? This silly jargon reminds of another meaningless phrase, the best interest of the child, also known as BIOTCH. Nobody knows what that is either.
Posted by Roger at 9:00 AM No comments:

Email ThisBlogThis!Share to TwitterShare to FacebookShare to Pinterest
Labels: money

Being fat is fine for men in the business world, but it might just weigh down women's prospects for promotion, research suggested yesterday. ...

Researcher Mark Roehling, an associate professor of human resource management at Michigan State University, said that the attitudes appeared to contribute to the glass ceiling.

"The results suggest that while being obese limits the career opportunities of both women and men, being 'merely overweight' harms only female executives – and may actually benefit male executives."

No, it doesn't show that at all. Maybe thin men are treated just as harshly as fat women.

Income in the USA is correlated with weight. Rich folks tend to be fat men and thin women. Poor folks tend to be thin men and fat women. There are a lot of explanations that have nothing to do with a glass ceiling.
Posted by Roger at 10:53 AM No comments:

My newspaper prints a Globalist Quiz every week. Here is this week's quiz:

Which of these facts about the Tata Nano is correct?

A. Its horsepower is comparable to that of a lawnmower
B. It is inspired by the Model T
C. It is a relatively safe car
D. All the above

The Tata Nano generates 10 times the horsepower of most lawn mowers, has nothing to do with the Model T, and fails to meet European and American safety standards. So I would say that all are incorrect. The paper says that the correct answer is that all are correct! This quiz is terrible.
Posted by Roger at 9:39 AM No comments:

How to get fired as a soccer coach

A girls soccer coach who told parents of his 6- and 7-year-old charges that he expected his players to “kick ass” has resigned.

Michael Kinahan says he “meant to give parents a chuckle” but that people took his message on a the team he dubbed “Green Death” the wrong way.

This paper actually shows the text of Kinahan's original e-mail and resignation.

Some big city papers have printed this story, but they don't give a link to the actual email. This is yet another reason that they are going bankrupt. None of them has learned to use the web effectively. I predict that as soon as we have a major city with no major newspaper, we will see a whole new kind of newspaper web site.
Posted by Roger at 11:40 AM No comments: