Here is the official CDC weekly death count, for the USA, including all causes. 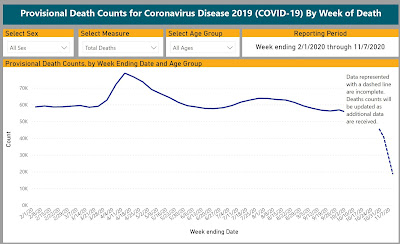 As you can see, COVID-19 caused a spike in deaths in April. There was a barely detectable surge in August. Other than that, people have been dying at about the rate they were before COVID-19.

The press often says that COVID-19 has killed hundreds of thousands of Americans. However it is clear from this chart that the number of excess deaths is much less than that.

To be fair, the CDC claims a greater number of excess deaths. It was predicting that the deaths would go down from 60k per week in January to 52k per week over the summer. I think that this is because the seasonal flu usually kills more people in the winter. So it is counting any death more than 52k per week as excess deaths. Counting this way, there have been excess deaths every week since March.

Supposedly the infections are increasing now, but those increased have not shown up in the death statistics yet. The dip at the end of the chart is from incomplete reporting.

The pages lists 220,704 deaths where COVID-19 was one of the causes. It was the sole listed cause in only 6% of the cases. Most of the deaths were elderly folks with multiple comorbidities.

I wonder what would have happened if this disease had just been called the flu, or the Wuhan flu, instead of being given a new name.

On Friday, Elon Musk said that in one day he took four Covid-19 tests — called rapid antigen tests — and received two negative and two positive results. He also tweeted that he took two PCR tests at separate labs and is waiting for the results.

Musk, who has been dismissive about Covid-19 and its severity, tweeted that something “extremely bogus” was going on.

Much as everyone has been demanding more testing all year, inaccurate tests are not that useful. The CDC even now says "A test-based strategy is no longer recommended", and says that a positive test should not stop health-care workers from going back to work.

It appears that our best bet is the Pfizer vaccine. Pres. Trump told us before the election that it was coming, but nobody believed him.