This way of thinking about biological sex is now frequently presented to children in school using such cartoon illustrations as The Genderbread Person (shown below). In the purple box labeled “Biological Sex,” you’ll notice the terms “male” and “female” are not used. Instead, terms denoting the idea of sex as a continuous variable—“male-ness” and “female-ness”—are chosen. Many of the traits listed as defining one’s degree of male-ness and female-ness are secondary sex organs and characteristics: genital morphology, body shape, voice pitch, and body hair. Conspicuously absent from this chart is any mention of primary sex organs (gonads, i.e. ovaries and testes in the case of females and males, respectively) or the typical functions associated with sex, such as menstruation in females and ejaculation in males. There is also no mention of eggs or sperm (produced by ovaries and testes, respectively). 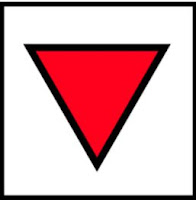 Apparently feminism is going to be brought down by transsexual freaks.

Meanwhile, Facebook is banning red triangles. Apparently it was once used for Commies. News to me.