To psycholinguist Julie Sedivy, it’s not Trump’s rambling language that’s worrisome, it’s his regular usage. “I think we have rarely had a president who uses such simple and simplifying language,” she said in an interview with Nautilus.

And why is that concerning? “There’s some interesting research that has looked at the correlation between simple language and the tendency of U.S. presidents to behave in authoritarian ways,” Sedivy said. “There is a predictive relationship that speeches that are expressed using very simple basic language tend to precede very authoritarian acts like the use of executive orders … That certainly plays out in the use of the heavy reliance on simple notions like amazing, sad, bad, unfair. These really strip away a lot of the complexities that are behind them. They reduce information into very gross impressions. The simplification of points of view, the simplification of the good and the bad, and even just the conveyance that, ‘We’re going to make good deals,’ for example. ‘It’s going to be great.’ That this is a simple problem just waiting for someone who has the right instincts to come along and solve this, is absolutely pervasive in Donald Trump’s language.” ...

By reducing complexity to simplified language, Sedivy said, “we’re essentially lying about the nature of the world.”

On the other hand, there are lots of Trump-haters who write thousands of words on why they hate Trump, but they never really get to the point. 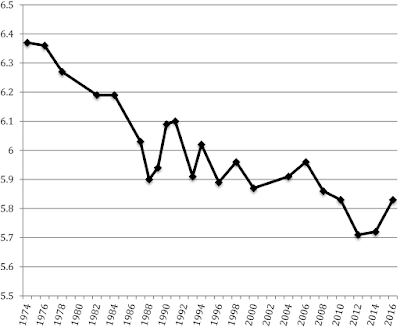 It turns out that simpler language is part of a wider trend. The above chart shows: Vocabulary decline in adult non-Hispanic White Americans (controlled for years of education completed).

We have a much more educated population, as more and more students finish high school and attend college. And yet they understand and use fewer words. Even the Bible has had to be dumbed down several times since the King James Version. It is not clear whether intelligence is declining, or colleges are less effective, or what.

Near the beginning of “Where’s My Roy Cohn?” the new documentary about the lawyer and power broker who mentored Donald Trump, an interviewee says, “Roy Cohn’s contempt for people, his contempt for the law, was so evident on his face that if you were in his presence, you knew you were in the presence of evil.” He wasn’t being hyperbolic.

Wow, if a non-Jew said this, he would be accused of anti-semitism.

Today, wealth and power can still buy horrible people a degree of social acceptance. Sean Spicer lied to the American people for a living and is now on “Dancing With the Stars.” Ivanka Trump is still reportedly invited to celebrity weddings.

This is so ridiculous, maybe she is just trolling us.

White Christians are losing more than an electoral majority; their once-dominant status in American society is eroding. Half a century ago, white Protestant men occupied nearly all our country’s high-status positions: They made up nearly all the elected officials, business leaders and media figures. Those days are over, but the loss of a group’s social status can feel deeply threatening. Many rank-and-file Republicans believe that the country they grew up in is being taken away from them.

Their country is being taken away from them.
Posted by Roger at 8:00 AM

White Protestant men are not being exterminated, they are less represented in leadership positions than in the past. Interesting graph about language usage though.