Steven Pinker wrote a new book on Rationality, and includes this argument:

“It’s wicked to treat an individual according to that person’s race, sex, or ethnicity.”

I probably agree with 90% of this book. It is good to be rational. He actually explains why an objective Bayesian would profile people based on race, sex, and ethnicity. Nearly everyone on Earth does this, to varying degrees.
The traditionalists have been doing it for millennia. The feminists and anti-racists are very much in favor of taking race and sex into account. Much more than conservatives, today. I have never even heard of anyone who does not take these things into account.

But then he says that it is wicked to do so. And so he says it is not rational.

Transgenderism has emerged as one of the most influential ideologies of our time. It is shaping people’s behaviour and thought in pursuit of a specific political objective – the erosion of the significance of biological sex. And it is undermining long-held cultural assumptions about what it means to be a man or a woman.

So is Pinker joining this ideology? I don't think so, as the transgender ideologues very much believe in distinguishing according to sex.

Transgenderism is making itself at home in the most unlikely of places. Rejecting long-held scientific assumptions, both Nature and Scientific American ‘have denied that there are clear criteria for classifying humans as male and female’ (2). The British Medical Association has also fallen in line. In its guide to ‘inclusive language’, it advises its members to use the term ‘pregnant people’ instead of ‘pregnant women’. Just recently the prestigious medical journal, the Lancet, decided to call women ‘bodies with vaginas’. It seems that, even in the scientific, medical domain, biological reality is being sacrificed at the altar of transgender ideology. 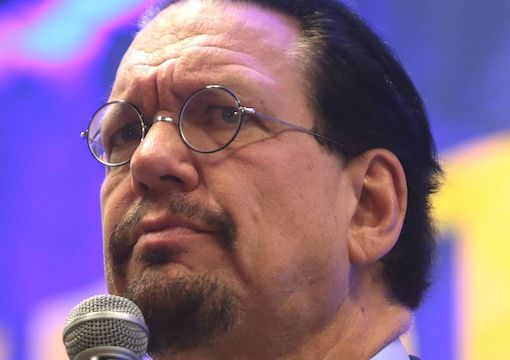 Here is another famous rationalist who has gone off the deep end:

Penn Jillette, the tall half of the hugely successful magician duo Penn & Teller, is one of the entertainment industry’s most outspoken atheists. For decades, Jillette has smugly condemned all manner of religious, psychic, and pseudoscientific irrationality. He also has a fan base on the right, because as a self-described libertarian, Jillette’s often mused about how “taxation is theft” and government compulsion is bad.

Penn Jillette: a man with no gods, including government. A man who falls for no (to use the title of his Showtime series) “bullshit.”

Then his teenage daughter decided that she’s a man. And the world witnessed how quickly the “smug” vanishes from the rationalist when the bullshit hits too close to home.

About a year or so ago, Jillette’s daughter, Moxie Crimefighter (yes, that’s her name), decided that she’d been “assigned the wrong sex at birth.” And she demanded that her parents no longer use female pronouns for her, like, ever.

This is madness. Our leading science publications, skeptic intellectuals, and other big levers of power and influence, have joined in saying nonsense about sex.

The big Leftist fear about Artificial Intelligence is that it will be too objective and rational. It will not accept the nonsense about race and sex being social constructs, and use the available data to distinguish people.

A Congressman was just kicked off Twitter for saying:

The title of first female four-star officer gets taken by a man.

Twotter's explanation is that it reinforces a harmful stereotype.

The argument is sometimes made that banning such speech is necessary because it causes harm and even death to those publicly advertise their gender changes. I do not believe that there is any research to support this. The closest I found was this USA Today article:

Do words directly cause harm?

According to a study by the American Academy of Pediatrics, on-screen violence causes increased aggressive thoughts and behavior as well as decreased empathy in viewers. The same could be said of hate speech, whether it's by politicians, celebrities or people you know.

"When people hear other people saying things that are hateful, for whatever reason and whatever group it's aimed at, it gives them permission, basically, to think that's true and to imitate that kind of speech," says Diana Zuckerman, president of the National Center for Health Research.

But this is just speculative opinion.

Saying that the 4-star officer is a man or a woman might encourage others to express similar opinions, or it might encourage opposing views. It is not hateful to say that someone is a man when everyone agrees he was a man 10 years ago. Okay, maybe he is less than a man today, depending on what was done to him.

Some people prefer to distinguish sex and gender. Some use terms man and woman for the sex, and others for the gender. In this case, it appears that the officer is now male sex and female preferred gender identity, for those who make that distinction. The term man is correct for the male sex.

This is not causing harm to him. Perhaps it might cause some reluctance by some parents to take their kids to a transgendered pediatrician to examine their naked bodies. But no one opposes calling this person transgendered.

Update: Here is an explanation of why AI is racist.