Times to be delusional 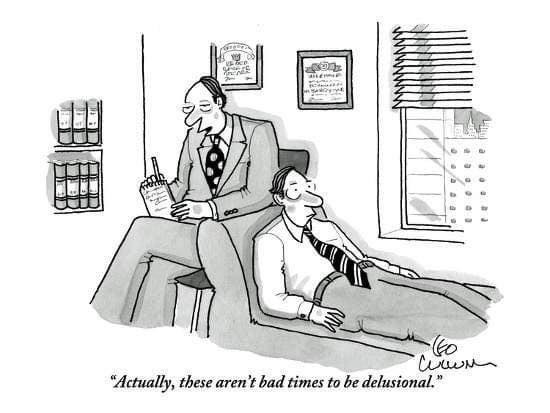 Barrett’s use of “sexual preference” alarmed many viewers, myself included, for good reason. The archaic phrase suggests that sexuality is a choice, that gay and bisexual people simply prefer to partner with people of the same sex — a preference that, with enough willpower, can be changed. As Jesse Bering explained in 2013, the term is similar to other expressions, like “the gay lifestyle” or “avowed homosexual,” that were once common but are now considered offensive. These phrases play into the anti-gay canard that sexual minorities are not a discrete and insular minority deserving of constitutional protections but rather deviants who should not be rewarded for their aberrant sexuality.

Today, the term “sexual preference” has almost universally been replaced with “sexual orientation,”

Wow, he is alarmed at the suggestion that people might have some personal autonomy?

He specifically denies that bisexual people are able to exercise a lifestyle preference. The term "bisexual" is commonly defined as one attracted to both sexes. Those people don't have sexual relations with everyone they are attracted to, so they make some choices, based on their preferences.

If she really wanted to alarm him, she should have said, "I have never discriminated on the basis of sexual orientation, because there is no such thing."

But I marvel at the hypocrisy of Republicans who are expressing shock and outrage over this, after the way the right has treated Muslims. President Trump responded to the alarm over Judge Barrett’s nomination by accusing Democrats of bias against Catholics and “basically fighting a major religion in our country.” This is rich from the man who is running against Joe Biden, a Catholic; who promoted a Muslim ban; and who told America, “I think Islam hates us.”

So the NY Times thinks that it is hypocritical for Trump to run against one Catholic, and appoint another Catholic to the Supreme Court.

I can’t help wondering: How would Republicans behave if Judge Barrett were a Democrat whose strongly held religious beliefs came from Islam instead of Catholicism?

We all know how it would go.

Republicans would demand she prove that she was not “working with our enemies.” That’s what Glenn Beck, the conservative radio host and conspiracy theorist, called for when Keith Ellison was elected as the first Muslim to Congress.

Ellison is working with our enemies.

Yes, an Islamic appointee would be a lot different. Islam is contrary to our whole civilization. We should not have an Islamic justice. Catholicism presents no such conflict, except on a few minor issues like the death penalty.

I was thinking last night about someone who asked a fairly prominent religious scientist — not Francis Collins — if he believed in the literal resurrection of Jesus.  The scientist refused to answer—and it wasn’t on the grounds that he kept his religion private. Rather, it was the equivalent of this person, who publicly and openly professed his Catholicism, saying, “I don’t want to answer.” When you get down to the actual claims of Catholicism, or of religion in general, scientists often take the Theological Fifth, in effect saying, “This far and no farther.”

Now I have my theory about this, which is mine. It’s that this person really truly believed in the Resurrection, but wouldn’t admit it in public because it would make him look credulous and superstitious. It didn’t comport with his evidence-based attitude towards his scientific beliefs.

Yes, some Catholics are reluctant to spell out their beliefs in public. But you could say the same about most academic leftists. You don't hear them say what they really think about George Floyd, for example. Book review:

This book, The Discovery of the Individual, only scratches the surface of the incredible novelties Europe saw during the long Middle Ages. The point of this article is simply to outline the importance the search for the inner being of humans was to men in the Middle Ages; what it means to have individuality, personality, to be inner-directed rather than faceless, impersonal, controlled by forces and emotions beyond one's understanding. Only if we understand the psychology of Western man will we understand the nature of the forces trying to destroy this unique man, replace him with masses of migrants from Africa and Asia with a poorly developed sense of inner being and personality.

Isn't that what is really wrong with ACB? She has an inner being, in line with a European religion and culture that go back to the Middle Ages.

Update: Since posting this, Newsweek notes:

The Merriam-Webster dictionary updated its definition of the word "preference" on Tuesday, to include that the word is considered offensive when referring to someone's sexual orientation.

The change came following Amy Coney Barrett's use of the term during day two of her Supreme Court confirmation hearings, and was noticed immediately by journalist Steve Krakauer, who took to Twitter to highlight the recent update of the definition.

Nevertheless, ACB continued to talk about preferences and choices that she made in her life.
Posted by Roger at 6:00 AM

No, the problem with ACB is that she has demonstrated policy preferences which are reflected in her rulings while maintaining that she is a neutral arbiter just calling balls and strikes.