Projecting Costs to the Year 2300 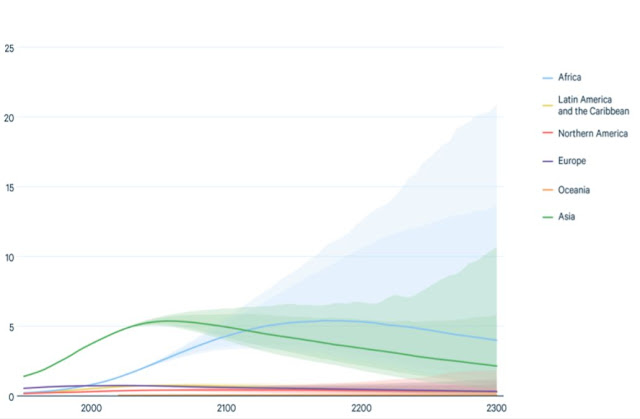 A new paper looks at the cost of carbon emissions out to the year 2300:

This paper, coauthored by scholars at RFF and top research universities, examines the key methods and challenges involved in estimating a more accurate social cost of carbon.

The paper mentions the effect of climate change on agriculture, but no one knows whether the cost will be positive or negative. Much of the paper is devoted to discussing how to figure the economic growth rate, and suggests using 2% or 3%.

If the economy really grows at that rate for 200 years, then everyone will have so much wealth that atmospheric carbon will be insignificant.

I was struck by the UN population projections, as shown above. As you can see, the world will be overwhelmingly African and Asian. Mostly African. Maybe 20 billion of them. Whites will be an insignificant fraction of the world.

So where is all that economic growth going to come from? Will Africans enslave the Whites and force them to invent new technologies? Where will the Africans get enough food to feed themselves?

If this kind of population growth takes places, there will probably be famines and wars that kill billions of people. They might burn coal just to increase atmospheric CO2 and crop yields. A small temperature increase will be the least of their problems.

Email ThisBlogThis!Share to TwitterShare to FacebookShare to Pinterest
Labels: climate