With his crisp blue suit and wire-framed spectacles, Garen Wintemute hardly looked frightening as he stepped to the podium last month to address a conference on paediatric emergency medicine in San Francisco, California. But his presence there made the organizers nervous.

Wintemute, an emergency-department doctor, is better known as the director of the Violence Prevention Research Program at the University of California (UC), Davis. As such, he has published dozens of papers on the effects of guns in the United States, where widespread gun ownership and loose laws make it easy for criminals and potentially violent people to obtain firearms. Wintemute has pushed the bounds of research, going undercover into gun shows with a hidden camera to document how people often sidestep the law when purchasing weapons. He has also worked with California lawmakers on crafting gun policy and helped to drive a group of gun-making companies out of business.

In the accompanying interview, he says at 10:30:

Q: Do you worry that some of these groups such as the NRA perceive you as an advocate for gun control rather than a data-driven scientist?

Wintemute: I am aware of that perception, the perception is wrong.

Wrong? In both the article and the interview, he openly brags about how he has lobbied for various gun control laws. Of course he is a gun control advocate.

An emergency-room physician is not a scientist. I hope he is not doing experiments on patients in the emergency room. Apparently the NRA objects to federal tax money supporting his political lobbying.
Posted by Roger at 8:00 AM No comments:

There is another spate of article on how men are somehow deficient because they lack mindreading capabilities. Here is one:


It's a cliché that men just don't understand women.

The research, published Wednesday (April 10) in the journal PLOS ONE, showed that men had twice as much trouble deciphering women's emotions from images of their eyes compared with those of men. Parts of the male brain tied to emotion also didn't activate as strongly when the men looked at women's eyes.

While pop culture claims that men are from Mars and women are from Venus, both sexes are pretty similar. Yet despite the genders' psychological overlap, a few small studies in men have suggested they have trouble "mind-reading" and guessing what women are thinking and feeling. For instance, one study found that men interpret friendliness from women as sexual come-ons.

These studies touch on human nature, but fail to say the obvious. Men are much more direct than women, and are much better communicators. Women are programmed to disguise their emotions, and are therefore much harder to read.

If women were more explicit in their sexual come-ons, then life would be simpler for men. But women much prefer to disguise their feelings with ambiguous signals, such as showing friendliness when they intend a sexual come-on. 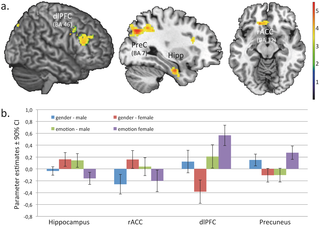 
Do you often feel misunderstood by men? Do they fail to pick up on fairly obvious nonverbal signals, such as expressions of fear or disgust? Newly published research suggests your perception is entirely valid — but it’s not his fault.

A study from Germany finds that men do a much better job of interpreting one vital set of signals — the emotions conveyed by the eyes — when they’re communicating with another man, compared to another woman.

“The finding that men are superior in recognizing emotions/mental states of other men, as compared to women, might be surprising,” a research team led by psychiatrist Boris Schiffer reports in the journal PLOS ONE. They add, however, that it makes considerable sense in evolutionary terms. ...

Indeed, that ability to read male faces could still prove valuable in business meetings or political showdowns. Unless, of course, your negotiating partner is a woman. So, like our taste for fatty foods, this may be another example of an evolutionarily advantageous adaptation that no longer serves us well. In the words of the 16th century proverb, the eyes are the window to the soul. But for men gazing into the eyes of women, that pane of glass is fogged over.

If men and women have a difficult time communicating, it is mainly because women have a hard time articulating to men.

Since the invention of verbal communication a million years ago, there is very little need for reading faces.
The Salon article drew this comment:


we give a rats ass, we're just waiting for them to stop talking about completely irrelevant crap and get to the point.

We cannot watch football and listen to how you chose the blue socks over the red socks because of thread count.

Holy crap, no kidding. I can't count the times I've thought to myself "It's been 15 minutes of non-stop talking, and I *still* have no idea what she wants from me or what the problem is".

She: "I've got something really important to tell you"
Me: "OK"
She: "Do you remember me telling you about my cousin Gerald who lived in the city? Well it seems that one day he met this girl who had white shoes. The same type of white shoes that Jessica ordered from Eddie Bauer. Well, it seems that Eddie Bauer used to have a yearly sale on their flannel shirts; you know the ones, I use to use them for the cat bed when they got old. Anyway, Jessica's car got broken into the other day and she called me up crying. I told her to call the police, but you know how she has issue with the police due to the fact that her ex was a cop. She told me about this great place for breakfast..."

Here is a good online test for reading emotions in the eyes, on some Harvard professor's web site. I somehow got a high score, even tho I thought that I was guessing most of the time. Do you know what "aghast" eyes look like? Apparently our brains are wired for reading faces, but such mindreading is unreliable compared to verbal communication. Reading faces is somewhat useful when the facial expressions reinforce the verbal communication. But it is confusing otherwise. There are people, especially women, who have a terrible time understanding the simplest verbal communications because of faulty mindreading methods.

Trying to do science without math

For many young people who aspire to be scientists, the great bugbear is mathematics. Without advanced math, how can you do serious work in the sciences? Well, I have a professional secret to share: Many of the most successful scientists in the world today are mathematically no more than semiliterate. ...

If your level of mathematical competence is low, plan to raise it, but meanwhile, know that you can do outstanding scientific work with what you have. Think twice, though, about specializing in fields that require a close alternation of experiment and quantitative analysis. These include most of physics and chemistry, as well as a few specialties in molecular biology.

Newton invented calculus in order to give substance to his imagination. Darwin had little or no mathematical ability, but with the masses of information he had accumulated, he was able to conceive a process to which mathematics was later applied.

I subscribe to this quote, falsely attributed to Galileo:

So if you are innumerate and you want to be scientist, then either learn math or try to avoid anything that involves the quantitative analysis of experiments. Good luck with that.
Posted by Roger at 8:00 AM No comments: