Not All Cavemen were African 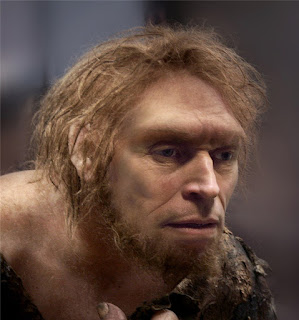 The caveman has been portrayed as Neanderthals for a long time. There used to be two competing theories for early humans, Neanderthal and Cro-Magnon man. Neanderthals were from Europe, Cro-Magnon from Africa. Both seemed to have tools, art, culture, and language, and were on the path to evolve towards humans.

Then in the 1980s came the Out Of Africa theory, claiming that an African migration of about 50,000 years ago wiped out all others, and we are all Africans. Neanderthals and others were claimed to be extinct.

This was shot down about 10 years ago, when genetic evidence showed that modern Europeans and Asians were partially descended from Neanderthals.

This usage has become universal. Nobody says the straight truth, which is that today's Caucasians and Orientals are descended from Neanderthals and Cro-Magnons.

For example, here is Encyclopedia Britannica:

Until the late 20th century, Neanderthals were regarded as genetically, morphologically, and behaviorally distinct from living humans. However, more recent discoveries about this well-preserved fossil Eurasian population have revealed an overlap between living and archaic humans. 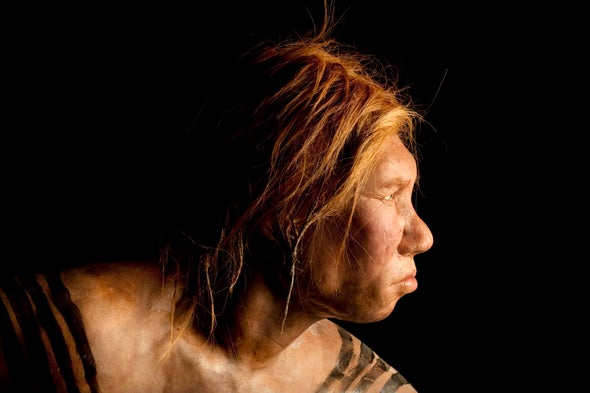 So they admit that research has proved that the Neanderthals were not really distinct from humans, but insist on calling Neanderthals "archaic" and the rival African migrants "modern humans".

Resaerch on multiple fronts has proved that Neanderthals were just as modern as the Cro-Magnons. For example:

Until the early 2000s, it was widely thought that Neanderthals lacked the capacity for complex communication, such as spoken language. Supporting that hypothesis was the fact that the flattened cranial base of Neanderthals — similar to that of modern infants prior to two years old — did not provide sufficient space for the production of vowels, which are used in all spoken languages of modern humans. However, studies beginning in the late 1980s of the hypoglossal canal (one of two small openings in the lower part of the skull) and a hyoid (the bone located between the base of the tongue and the larynx) from the paleoanthropological site at Kebara, Israel, suggested that the Neanderthal vocal tract could have been similar to that found in modern humans. Moreover, genetic studies in the early 2000s involving the Neanderthal FOXP2 gene (a gene thought to allow for the capacity for speech and language) indicated that Neanderthals probably used language in the same way that modern humans have. Such a deduction had also been extrapolated from interpretations of the complex behaviours of Neanderthals — such as the development of an advanced stone tool technology, the burial of the dead, and the care of injured social group members.

People used to say that Cro-Magnons were more advanced than Neanderthal, but I don't think anyone says that anymore.

I am not sure what is behind this. Possibly some don't like some of the research, such as:

Research on Neanderthal genetics and its relation to that of modern humans moved rapidly during the early 21st century, especially following the publication of the complete Neanderthal nuclear genetic sequence in 2010. Comparisons of modern human and ancient Neanderthal DNA suggested that some Neanderthals may have had pale skin and red hair. Genetic evidence taken from sites with the remains of multiple individuals pointed to Neanderthals living in small isolated close-knit extended families. In these family groups, the males were closely related, which suggests that these groups were possibly patrilocal; that is, females settled with the males’ relatives.

I think that they are trying to convince everyone that humans evolved in Africa, for ideological reasons. Saying we are all African is seen as supportive of Leftist goals.
Yes, we are descended from African apes. But if you look at many of the qualities that make us uniquely human, and not apes, some of them appear to have evolved first in European Neanderthals, and then in Neanderthal-Cro-Magnon hybrids.
Posted by Roger at 6:00 AM