White people have much less money per capita than the Jews. They have much less influence on society. Whites rarely make decisions that affect any public policy. Jews are the ones with the power, they are the ones making the decisions, but they are telling us that unlike whites, they are not a group, so they can’t ever be talked about. This is unacceptable.

Jews destroyed my life. They destroyed Ye’s life. We have a lot at stake here. We want to understand what is going on, and we need these Jews who control everything to explain it to us.

Here are some other topics of conversation:

We need to discuss all of these things and much more.

Jews did destroy his life, and they are out to get Kanye West and others.

He does not even mention the Democrat Party, which is run by Jews and doing many things to ruin the USA.

Alan Dershowitz has gone negative on Ukraine. It has a Jewish president, but is one of the most anti-Jewish countries in the world.

Here is Sen. Chuck Schumer explaining that his "ultimate goal" is to bring in non-white immigrants to replace the White population that is aborting its babies. Okay, he does not say it exactly that way, but watch it for yourself. Yes, Jews are plotting to replace us.

Google says that if I mention this topic, I should include the Wikipedia definition:

The Great Replacement (French: Grand Remplacement), also known as replacement theory or great replacement theory,[1][2][3] is a white nationalist[4] far-right conspiracy theory[3][5][6][7] disseminated by French author Renaud Camus. The original theory states that, with the complicity or cooperation of "replacist" elites,[a][5][8] the ethnic French and white European populations at large are being demographically and culturally replaced with non-white peoples 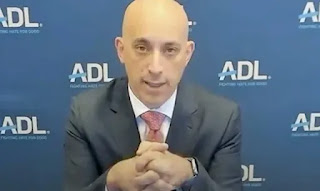 For some Jewish opinion, here is Jonathan Greeblatt of the Jewish ADL tweeting:

Nov 19 Official
.@elonmusk's decisions over the last month have been erratic and alarming, but this decision is dangerous and a threat to American democracy. We need to ask — is it time for Twitter to go?

He is referring to allowing Donald Trump back on Twitter. He also tweeted about using Jewish power to destroy those he does not like.

He says it is anti-semitic to say Jews have power.

In all fairness, I cannot blame all Jews for this kook. A Jewish magazine writes:

But we Jews don’t control Kyrie Irving; in theory, we do control the ADL, and we shouldn’t want our chief defense group to behave in a way that advances antisemitic conspiracy theories about shadowy Jews trafficking in money and influence for fun and profit.

All of this leads to one sorry conclusion: It’s time to say goodbye to the ADL. It can’t be killed, so we need to just walk away from this formerly venerable organization, and weaken it before it swerves so far off the road that it takes us with it.

If you think the above is hyperbole, or if you haven’t been paying much attention to the ADL lately and still imagine it as a paragon of the good fight against antisemitism, here’s a sizzle reel of Greenblatt’s years in office. Since leaving the Obama White House and taking over the organization in 2015, Greenblatt has turned the ADL into a partisan attack machine, fueled by corporate cash and increasingly oblivious to any real suffering of any real Jews.

The article goes on to explain how Jewish organizations will sell out their fellow Jews to align with leftist causes.
Posted by Roger at 6:00 AM

Roger,
I think I understand more or less what you are talking about, but you need to tread carefully for two VERY good reasons.

1. You are correct, and there is an evil Jewish cabal that is trying to do 'x'...in which case they will come after you and do you harm, unless you are far more discreet about it.

2. You are incorrect, there really is no organized cabal trying to do 'x'...in which case you are doing harm villainizing an entire group of people for the actions of a tiny few...like an un-named man with an unusual love of Hugo Boss fashion and goose-stepping once did...and you really don't want to be like this guy.

I think in more concrete forms of preventing such uncertainties from occurring or flourishing in the first place. Quite simply, I believe there should be no such thing as dual citizenship. Why should it even exist at all except to create intentional ambiguity? If you can not decide or clearly declare your loyalties, you do not belong to a particular group. period. This really applies to anything involving integrity, not just citizenship.

There are no 'citizens of the world', or nebulous abstract nations, or borderless countries, everything legitimate is pretty much delineated. Everyone who serves in any position of power in a country's government or bureaucratic infrastructure should be a citizen of that country, and no other for obvious reasons. If a person is found to be serving the interests of a foreign country ahead of or at the expense of the country they reside in, they should be removed from their position at once. If you are unwilling to declare your loyalties, you can not be trusted pretty much by anyone. It's a bitch, but that's the way it works if you wish to keep your country from becoming someone else's plaything.

In all honesty, People who wish to engage in activities that favor a country other than the country they are a citizen of, really should relocate to where their loyalties are congruent. To do otherwise is for all purposes dishonest or betrayal and outright malicious. In practice, this isn't a complicated idea, you wouldn't want an avid atheist leading a religious congregation, or a crypto republican running or serving in the democrat party, or a Catholic priest presiding over a Jewish synagogue, or a competitor to your business doing your accounting or keeping minutes in your meetings. Folks who like to play in the '5000 shades of gray' card of mixed loyalty should not be trusted in anything by anyone.

My position in this matter is pretty much color blind and impartial, as it applies to anyone, anywhere, anytime, throughout history of any race, religion or creed, tribal religious/cultural affiliations are also no exception to this. I would expect no more or less from any honest and sane citizen of any country past or present.

I agree that dual citizenship does not really exist, and those claiming it cannot be trusted.

Jews often disagree about things, as noted above.