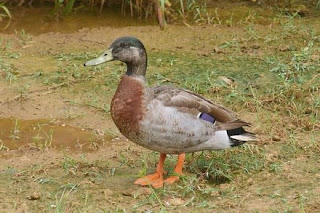 
When the male mallard Trevor the Duck landed on the tiny island of Niue, administratively part of New Zealand, I was both thrilled and enchanted. How did he get there? Who knows?

And would he survive? Niue has no standing water, and Trevor gravitated towards a small, muddy puddle. But the locals pitched in, feeding him, and even topping off his pond (the Niue Fire Department get kudos here). And, as I’ve recounted here, I offered to pay expenses to move Trevor to New Zealand, an offer communicated to the government by Heather Hastie. Trevor would be better off there, as NZ has bigger ponds and lots of friends and mates for Trevor. Sadly, they turned me down, citing quarantine restrictions, but they did ask a team of Kiwi vets to check out the duck when they visited Niue. He was pronounced healthy.

Sadly, Trevor was killed last week by a dog, and the heartwarming saga has come to an end. The New York Times even wrote Trevor an obituary ...

This is ineffably sad. I still think that the government of New Zealand could have had empathy for one lonely duck, and tested him for disease or even put him in quarantine. Now he’s dead. Yes, he was “only a duck,” but the life of that duck meant everything to him, and that’s what people don’t seem to realize, except for the inhabitants of Niue who cared for him.

I’m a big fan of New Zealand, but this time they dropped the ball.

I am not criticizing him. I am just trying to understand it. He has written good books on evolution, so obviously he understands that animals die in the wild all the time. The whole system of life on Earth depends on it.

While he is a leftist and a Trump hater, he is not part of the Ctrl Left or a subscriber to wacky leftist ideologies like animal rights.

I don't know why he would want to help this duck, or why he would think that he knows what is good for it. Maybe this duck made an extraordinary effort to get to the island, and would be angry if it got moved away.

Here is an evolutionary view of empathy:


We differ from individual to individual in our capacity not only to understand how others feel but also to experience their pain or joy. This “affective empathy” also differs between the sexes, being stronger in women than in men. Does it also differ between human populations? It should, for several reasons:

- It differs in adaptiveness from one cultural environment to another, being adaptive in high-trust cultures and maladaptive in low-trust ones. There has thus been a potential for gene-culture coevolution.

- Such an evolutionary scenario would require relatively few genetic changes. Affective empathy exists in all human populations, and most likely already existed in ancestral hominids. Differences within our species are thus differences in fine-tuning of an existing mechanism.

So it evolved in high-trust human societies so humans can better cooperate. In a low trust society, empathy gets you killed. The guy probably evolved from high-trust Europeans. But no one would have evolved empathy for a duck on the other side of the world.
Posted by Roger at 8:00 AM