Jews out to get Assange

I thought that Jews like Julian Assange, but a Jewish magazine has a article on how he is anti-Semitic:


But what many may not know is that he has long been dogged by allegations of anti-Semitism, despite the fact that some of his most loyal employees and public defenders are themselves Jewish. ...

In 2011, Ian Hislop, the editor of the British magazine Private Eye - which combines Onion-like satire with investigative journalism - interviewed Assange about Shamir and other anti-Semitism issues that had begun to pop up around WikiLeaks. According to Hislop, Assange named a number of British journalists who were apparently part of a conspiracy against him - all of whom, Assange allegedly said, “are Jewish.” In fact, one of the people he listed was not Jewish, and when Hislop pointed this out, Assange reportedly replied, “forget the Jewish thing.” Assange claimed that he was misquoted by Hislop, who admitted that he took no notes of the conversation but stood by his reporting.

Really? This might be the dumbest accusation of anti-Semitism I have seen yet.

Assange has been a prisoner for about 7 years. I guess he is just supposed to put up with Jewish persecution without noticing that his enemies are mostly Jewish.


“How does killing Jews help the European race? The European race is doomed? What are you talking about? These Jews were innocent!” Every Jew is responsible for the meticulously planned genocide of the European race. They act as a unit, and every Jew plays his part to enslave the other races around him — whether consciously or subconsciously. Their crimes are endless. For lying and deceiving the public through their exorbitant role in news media; for using usury and banks to enslave nations in debt and control all finances for the purpose of funding evil; for their role in starting wars on a foundation of lies which have costed millions of lives throughout history; for their role in cultural Marxism and communism; for pushing degenerate propaganda in the form of entertainment; for their role in feminism which has enslaved women in sin; for causing many to fall into sin with their role in peddling pornography; for their role in voting for and funding politicians and organizations who use mass immigration to displace the European race; for their large role in every slave trade for the past two-thousand years; for promoting race mixing; for their cruel and bloody history of genocidal behavior; for their persecution of Christians of old (including the prophets of ancient Israel—Jeremiah, Isaiah, etc.), members of the early church (Stephen — whose death at the hands of the Jews was both heart-wrenching and rage-inducing), Christians of modern-day Syria and Palestine, and Christians in White nations; for their degenerate and abominable practices of sexual perversion and blood libel (you are not forgotten Simon of Trent, the horror that you and countless children have endured at the hands of the Jews will never be forgiven); for not speaking about these crimes; for not attempting to stop the members of their race from committing them. And finally, for their role in the murder of the Son of Man — that is the Christ. Every Jew young and old has contributed to these. For these crimes they deserve nothing but hell.

He just murdered one old lady. I doubt that she contributed to any of those alleged crimes, and it would still be murder even if she had. This appears to be an example of someone who is anti-Jewish and committing a hate crime.

There was also a shoot-out at a Baltimore church, also killing one. It will not be as big a story. 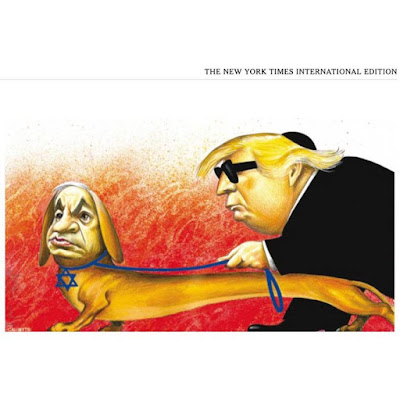 Meanwhile, the NY Times admitted to an anti-semitic cartoon. I don't really get what is anti-semitic about it. It is only anti-semitic in the sense that Jews will complain about anything. It portrays Pres. Trump as blind, fat, and Jewish, which he is not, so it is anti-Trump. That is okay, apparently. The problem is that he is being led by a Jewish dog. Weird.

The pro-Israel Jewish NY Times opinions writers like Bari Weiss say it is anti-semitic, but other Jews disagree.
Posted by Roger at 8:00 AM