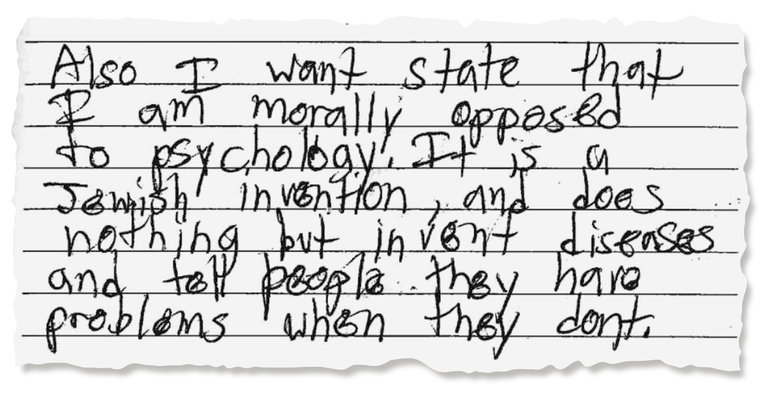 “I want state that I am morally opposed to psychology,” wrote the young white supremacist who would murder nine black worshipers at Emanuel A.M.E. Church in Charleston, S.C., in June 2015. “It is a Jewish invention, and does nothing but invent diseases and tell people they have problems when they dont.” ...

“I will not be calling mental health experts or presenting mental health evidence,” he wrote to Judge Richard M. Gergel of Federal District Court on Dec. 16, a day after a jury took only two hours to find him guilty of 33 counts, including hate crimes resulting in death, obstruction of religion and firearms violations. ...

Mr. Bruck and his team have argued in court filings that Mr. Roof, a ninth-grade dropout, “has no right to represent himself in a capital trial, and even less so at the penalty phase.” But in the 41 years since the Supreme Court recognized a Sixth Amendment right of self-representation for criminal defendants, in Faretta v. California, the court has never specifically narrowed that holding for death penalty trials, despite their complexity.

This makes sense to me. With his attorneys arguing, he is 99% likely to get the death penalty. If he argues the penalty phase himself, he is no going to change that probability much.

He apparently committed this horrible crime to make some sort of statement, and he was willing to die for it. However misguided his thinking, he would probably rather explain himself in court than have some lawyer say he was crazy. Besides, he gets a lot of free appeals if he is on death row, and he throws a monkey wrench into the process by forcing lawyers and judges to spend years discussing his motives.
Posted by Roger at 8:00 AM