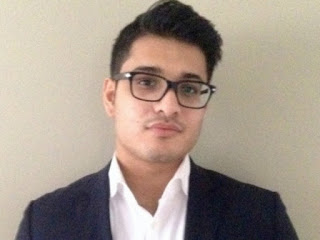 
TORONTO — Whenever someone used to ask me if I was Muslim, I often gave an evasive answer, something like, “I was born Muslim” or “My parents are Muslim.”

It was a strange way to phrase it. I told myself that the purpose of this hairsplitting was intellectual clarity, despite the fact that I had attended a mosque my entire childhood, that I had read the Quran in both Arabic and English, and that I felt personally connected to the history of Islam. Perhaps this was the natural recourse for someone who came of age after 9/11 and was taught to retreat into invisibility because of the dangers of being Muslim. I knew, in my heart, that I was drawing the distinction only to appear safer to white people, ...

The strange thing is that he describes himself as having been born into a religion of hating white people.

His skin is not even particularly brown, and he is caucasian. He apparently identifies whites with Christians, and identifies as non-white for reasons similar to those of Jews who identify as non-white.

He doesn't say whether he believes in Allah or the Koran. He just says that he was born with a tribal loyalty to brown Muslims, and with a hatred for white people.

He does not say whether he is in favor of killing infidels.


This is what those who are suspicious of Muslims cannot grasp: that the definition of racism is an inability to discriminate between the old man with the skullcap and beard before you and the suicide-bomber you saw on TV.

And yet he goes on to blame peaceful white people for the violence of others.


And yet people with millions of online followers have been incessantly preaching that Islamophobia is not the problem; Islam is. The Canadian intellectual Jordan Peterson has said that Islamophobia is a “word created by fascists.” The neuroscientist Sam Harris called it an “intellectual blood libel” that serves only to shield Islam from criticism. After I wrote a series of articles critical of Mr. Harris, a young white man from California emailed me to tell me he carried a gun — what kind did I carry? he asked.

How did he know that the email sender was "a young white man"? If it were really an anonymous threat, I doubt that he identified his race.

No, Aziz just blames white men for everything he doesn't like.

Aziz really triggered Harris somehow. Harris spent hours trashing him on his podcast, and just posted another podcast trashing him. Harris recognizes Islam as evil, but throws a tantrum if not everyone respects his motives as being pure.

If Islam is the problem, perhaps we should keep an eye on these Muslims. Send patrols into their neighborhoods. Make them prove that they are not terrorists. Ban them, as President Trump wanted. Ideas are not harmless: They are taken seriously by thousands of people. If only one person applies these deranged ideas about the other to the real world, we get a mass-murder like the one we just witnessed.

Islamic ideas are especially harmful, and lead to the murder of millions.

The NY Times likes to publish rants like this against White Christians. It would never similarly attack another ethnic group, because of a belief that Jews should align with non-whites against whites.
Posted by Roger at 8:00 AM