Masked gunmen stormed an office used by the European Union in Gaza City on Monday to protest cartoons published in Denmark and Norway.

Five men entered the building and closed down the office while 10 men stood watch outside.

One of the men said they were protesting the caricatures, one showing the Prophet Muhammad wearing a turban shaped as a bomb with a burning fuse.

I mentioned the cartoons below. 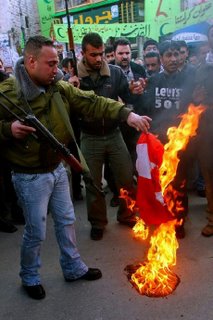 This picture shows Mohammedans burning a Danish flag. There are more pictures here.

DUBAI (Reuters) - An Iraqi militant group called on Monday for attacks against Danish and Norwegian targets over satirical cartoons of Islam's Prophet Mohammad, saying a boycott of goods was not enough, according to an Internet statement.

"Boycotting cheese and dairy products alone is a flimsy stance that fits a weak nation that cannot defend its prophet ... They started this and they have to shoulder the responsibilities," said the statement attributed to the Mujahideen Army.

It called on its fighters to "hit whatever targets possible belonging to these two countries and other (countries) that follow their steps".

Here is the Hamas Charter.
Posted by Roger at 9:49 AM