Vaccine does not stop outbreaks 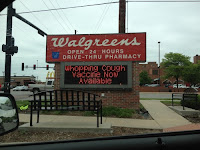 In early 2010, a spike in cases appeared at Kaiser Permanente in San Rafael, and it was soon determined to be an outbreak of whooping cough -- the largest seen in California in more than 50 years.

Witt had expected to see the illnesses center around unvaccinated kids, knowing they are more vulnerable to the disease.

"We started dissecting the data. What was very surprising was the majority of cases were in fully vaccinated children. That's what started catching our attention," said Witt.

Before you say that it is obvious, it is not. Pertussis vaccination immunity wears off at about age 7, and pertussis is common in teenagers. It is not a disease that has been eradicated, even in communities that are 100% vaccinated according to the schedule. The baby in the story may have gotten pertussis from a teenager or adult.

The pro-vaccine and leftist-science advocate are always complaining about pertussis (whooping cough) outbreaks, and falsely blaming them on the 2% or so of the population getting exemptions.

Update: The situation for measles is different:

(CBS/AP) Health officials say last year was the worst year for measles in the U.S. in 15 years.

There were 222 cases of measles reported. Most of the cases were imported -- either by visiting foreigners or by U.S. residents who picked up the virus overseas.

Measles has been eradicated from the USA, and vaccination levels are high enough that epidemics are impossible. Occasionally a case comes in from overseas, and spread to a couple of others, but that is all. We don't require foreign visitors to be vaccinated, and we get a lot of visitors. Even with 222 cases, that is a lot lower than most other countries. Update: The Bad Astronomer complains that he lives in a community of left-wing intellectuals, and they are the most skeptical about vaccination. He he gets a booster every ten years, even tho the CDC recommendation is only for "a single dose of Tdap (ADACEL) apply to adults aged 19–64 years who have not yet received Tdap."
Posted by Roger at 11:30 AM

Email ThisBlogThis!Share to TwitterShare to FacebookShare to Pinterest
Labels: vaccines