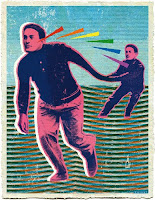 WHY are political and religious figures who campaign against gay rights so often implicated in sexual encounters with same-sex partners?

In recent years, Ted Haggard, ...; Larry Craig, a United States senator who opposed including sexual orientation in hate-crime legislation, was arrested on suspicion of lewd conduct in a men’s bathroom;...

Craig was not implicated in sexual encounters with same-sex partners. The news media had a huge manhunt for such partners, and never found any.

One theory is that homosexual urges, when repressed out of shame or fear, can be expressed as homophobia. Freud famously called this process a “reaction formation” — ...

It’s a compelling theory — and now there is scientific reason to believe it. In this month’s issue of the Journal of Personality and Social Psychology, we and our fellow researchers provide empirical evidence that homophobia can result, at least in part, from the suppression of same-sex desire.

Only crackpots mention Freud and "scientific reason" together.

That's the theory? That a man can recognize homosexual images more quickly if he is repressing his own homosexual urges out of shame or fear?

This is junk research. Where are the studies on the motivations of those who promote homosexuality?

The article is written by two people with the surname Ryan, with no explanation of how they are related.

This is a profession that voted to not say that homosexuality was a disorder, but now they seem to be saying that anyone who disagrees with them has a disorder. This is part of a trend where psychologist try to pathologize a lot of things that are not disorders. Meanwhile, studies of psychologists show that they have mental disorders much more than other professions.

I get the impression that psychology is very fragmented, with some real quacks in there who are just out to grab headlines. Taking their lead from Freud I suppose.

They seem to invent tests which aren't so much tests as integral parts of the theory so they end up with circular reasoning.

Yet it surely doesn't have to be like that.

Sure, Haggard it explained it all very well. "issues".

Haggard had supported Colorado Amendment 43, which bans same-sex marriage in the state.

In his own words, he's not a homosexual, he's just a "heterosexual with issues."

Richard Curtis wearing a red negligee and Castagna has pictures to prove it. Pictures he only took as revenge when it was discovered that Curtis only had $200 in his wallet.

Rekers There is no way to stumble upon a profile on rentboy.com, as they are all private. So obviously, Rekers had an account there.

There are also AA members who drink alcohol. Most people are against same-sex marriage -- nothing unusual about that view.

He advocates straight forward sexual orientation. Something unusual about that considering he doen't advocate it for himself.

Hypocrisy is the state of pretending to have virtues, moral or religious beliefs, principles, etc., that one does not actually have

They didn't find evidence of rape.

Instead, they found videotapes of hundreds of sexual encounters with men that Barclay filmed on high-tech surveillance cameras. It was apparent that Barclay and McCurdy had consensual sex.

It was also apparent that his personal Republican stance was not as right-wing as he'd led people to believe.

So Barclay was falsely accused of rape, and ended up being charged with various other crimes. He was also a Republican. How is this story relevant? Did you previously think that no Republicans even committed crimes?

You include people on your list who are not gay, not conservative, and not anti-gay. There are also Democrats who turned out to be gay. Ever heard of Barney Frank?

Why is opposition to gay marriage anti-gay? People like Justin Raimondo and James O'Meara are homosexuals who oppose homosexual marriage.

Your assumption tells a lot.

Do you have a pathology, too? Or is that just for the homophobes?