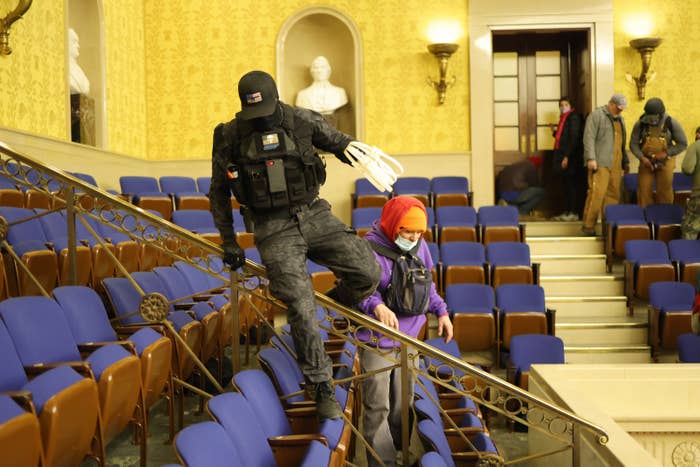 In one of the most iconic photographs of the January 6 Capitol melee, Eric Munchel, wearing tactical gear, is seen holding up a fistful of zip ties in the Senate gallery. Munchel, the media quickly concluded, brought the flex cuffs to arrest lawmakers attempting to certify the results of the 2020 presidential election. The woman photographed with him later was identified as his mother, Lisa Eisenhart.

The top federal prosecutor who handled the first two months of the Justice Department’s Capitol breach probe recently bragged that Munchel was one of the first protestors targeted in the agency’s unprecedented 50-state manhunt for alleged “insurrectionists.”

The feds threw the book at them, as they were prosecuted for the so-called armed insurrection. They were held in jail without bail, because they were supposedly so dangerous.

But they were just innocent pro-democracy protesters, like everyone else.

The three judges carefully deconstructed the charges against mother and son, noting neither has been accused of violence such as assault or destruction of property. One judge argued the detention order should be reversed, not revisited. In his partial dissent, Judge Gregory Katsas took aim at the Justice Department’s exaggerated case.

“While there, they attempted neither violence nor vandalism,” Katsas wrote. “They searched for no Members of Congress, and they harassed no police officers. They found plastic handcuffs by chance, but never threatened to use them. Munchel’s threat to ‘break’ anyone who vandalized the Capitol was intended to prevent destruction and was addressed to no one in particular.”

Katsas detailed how both defendants fully cooperated with authorities, both were employed at the time of surrender—Eisenhart has been a nurse for 30 years—and neither has a criminal record with the exception of Munchel’s two marijuana possession charges from several years ago.

The only felony the government could come up with to charge Munchel and Eisenhart—who are being charged together—is “obstruction of an official proceeding,” which is an enhancement count filed against defendants charged with misdemeanors.

If this were any other country, they would be regarded as political prisoners.
Posted by Roger at 6:00 AM