An NPR Radio program interviewed a couple of sociologists with some weirdo anti-white racial theories:


Why use the phrasing "racial resentment" in the survey? Why not "racism"?

That's an interesting question. There are two parts to this answer. The first is that sociologists, political scientists and other scholars distinguish between older, more explicit forms of racial prejudice — founded on assertions of biologically-based differences between racial groups — and more "modern" forms of prejudice.

Since the civil rights movement, white Americans increasingly reject old-fashioned or "Jim Crow-style" racism (statements like "white people are more intelligent than black people"). However, they continue to hold a number of negative attitudes toward African-Americans, including a tendency to attribute racial inequality to individual failings of black Americans and the belief that black people are responsible for the racial tension in this country.

So, the use of "racial resentment" distinguishes that it's the latter type of attitude that is triggered by threats to whites' standing.

The second is that Americans generally tend to think of "racism" as a stable characteristic of individuals, not something that can be prompted or change in response to changing circumstances or social trends. Since we're highlighting the way that changing perceptions of the social world influence whites' racial attitudes, we wanted to use a term that emphasized that these attitudes can change over time, which feelings of resentment more clearly communicates.

Statements about average intelligence of groups are simply statements of fact, and have nothing to do with anyone's politics or opinions.

Having negative attitudes towards blacks does not necessarily have anything to do with "threats to whites' standing."

The NPR program has anti-white messages all the time.

Women do not yet run Austria, and it is doing something about its invaders:


Austria is closing seven mosques and could expel dozens of imams from the country, the government has announced.

At a press conference on Friday, Chancellor Sebastian Kurz said the government is shutting down a Turkish mosque and dissolving a group called the Arab Religious Community, which runs six mosques.

The Austrian government's actions stem from a 2015 law, which bans foreign funding of religious groups and required Muslim societies to have "a positive fundamental view towards [Austria's] state and society".

"Parallel societies, political Islam and tendencies toward radicalisation have no place in our country," Kurz said.

Austria is home to an estimated 600,000 Muslims, mostly of Turkish origin.

Turkey expelled its Christians long ago.

Here is a chart of a Jewish newspaper using the word racism. 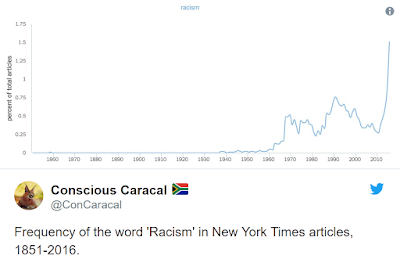