Over recent days, palaeoartist [sic, paleoartist] Emily Willoughby has been accused of being associated with race science and its attendant political positions. For that reason I cannot, from hereon, have any association with Emily or her work. I will not be engaging in discussion on this matter.

In tracing down the chain of evil associations, I am usually led to Steve Pinker, the widely respected Harvard Psychology professor. He is a typical Jewish Atheist Leftist in his politics, and not a White Supremacist, but he once wrote an excellent book critiquing The Black Slate. The anti-evolution Left will forever hate him for that book.

It is obvious that Naish and all the other cancelers believe that Blacks are inferior, and that any research into the subject will further demonstrate that.

Update: I found Willoughby being blamed for this cartoon. 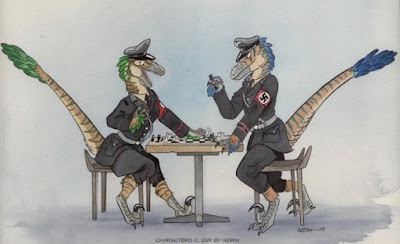 I am not sure what the complaint is. This is a drawing a dinosaurs in Nazi uniforms playing chess. I cannot find any direct complaint against her. They just hate the field she is in. She wrote this good summary of what is known about intelligence.