Rocket scientist from another era 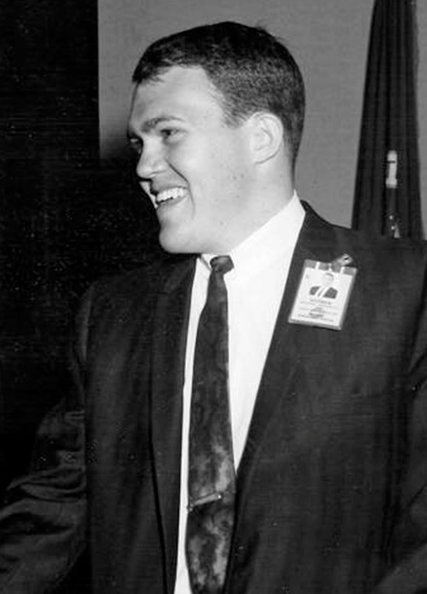 
On July 20, 1969, moments after mission control in Houston had given the Apollo 11 lunar module, Eagle, the O.K. to begin its descent to the moon, a yellow warning light flashed on the cockpit instrument panel.

The alarm appeared to indicate a computer systems overload, raising the specter of a breakdown. With only a few minutes left before touchdown on the moon, Steve Bales, the guidance officer in mission control, had to make a decision: Let the module continue to descend, or abort the mission and send the module rocketing back to the command ship, Columbia.

By intercom, Mr. Bales quickly consulted Jack Garman, a 24-year-old engineer who was overseeing the software support group from a back-room console.

Mr. Garman had painstakingly prepared himself for just this contingency — the possibility of a false alarm.

“So I said,” he remembered, “on this backup room voice loop that no one can hear, ‘As long as it doesn’t reoccur, it’s fine.’”

At 4:18 p.m., with only 30 seconds of fuel remaining for the descent, Mr. Armstrong radioed: “Houston, Tranquillity Base here. The Eagle has landed.”

Mr. Garman, whose self-assurance and honed judgment effectively saved mankind’s first lunar landing, died on Tuesday outside Houston. He was 72.

Could this ever happen again? I fear that men like Armstrong and Garman are going extinct.

So what are today's 24-year-olds doing? The Atlantic mag reports:

He told students that one “staggering” statistic stood above the rest. "In 2015, 22 percent of lower-skilled men [those without a college degree] aged 21 to 30 had not worked at all during the prior twelve months,” he said.

"Think about that for a second,” he went on. Twentysomething male high-school grads used to be the most dependable working cohort in America. Today one in five are now essentially idle. ...

So, what are are these young, non-working men doing with their time? Three quarters of their additional leisure time is spent with video games, Hurst’s research has shown. And these young men are happy—or, at least, they self-report higher satisfaction than this age group used to, even when its employment rate was 10 percentage points higher.

Many of these kids are still living with their parents:

Data released recently from the Census Bureau show that 30-year-olds today — as compared to 30-years olds in 1975 — are less likely to have hit many of the milestones that have come to define adulthood. In 1974 three in four 30-year-olds had married, had a child, were not enrolled in school anymore and had lived on their own; in 2015, just one in three could say that....

Millennials are also more likely to be in school in their 30s: 8% were enrolled in school at age 30 in 2015 versus 1% of 30-year-olds in 1975, according to the Census Bureau, which may also delay some of these milestones.

Email ThisBlogThis!Share to TwitterShare to FacebookShare to Pinterest
Labels: space

You know what happened. At some point maybe 40 or 50 years ago it was decided by big business that much cheaper and less demanding labour was available outside of the West. Skilled jobs were destroyed in the West and factories were built in the East. At one point over 40 workers could be hired in Asia for the cost of 1 in the West. With the rise of Japan and South Korea and the opening up of China (as well as their currency manipulations), skills in the West were hollowed out. The only thing that ameliorated this was the rise of computers and the internet. But serious damage was done. White people are at the sweet spot of intelligence and creativity, and far too many of us are having our lives wasted on flipping burgers and stacking shelves and selling what is built in the East. Meanwhile the East has children making things for fun because they are surrounded by cheap technology and skilled people that work in those fields.

Didn't anyone see this coming? In another generation we will be too incompetent to feed ourselves, and the robots will take over.

Roger, I think there were people that saw it coming. There were certainly politicians in Britain that in various ways did. For example, the likes of Tony Benn on the far left of politics who did not want to be part of the EU, but also did not want "free trade", and on the right Enoch Powell amd later James Goldsmith who started the Referendum Party saw what was happening. The Referendum party was the precursor to UKIP, which caused enough trouble electorally in the UK in the last decade that it led to the Brexit Referendum. Goldsmith has Jewish heritage, and certainly had the help in his life of very wealthy Jews. He is oddly native for a Jew, though. Perhaps he did not inherit the gene that inspires rabid hatred of whites. Here he is on Charlie Rose, talking about the disastrous international economic agreements that took us to where we are today. https://www.youtube.com/watch?v=wwmOkaKh3-s

The youtube video is about an hour but worth your time. I suppose it is what Trump alludes to so coarsely when he says China is stealing from us. The video is also interesting for looking back at the attitudes of back then. Consider the attitude of Rose toward NAFTA which was then only a few months old!

Thanks for the link to https://www.youtube.com/watch?v=wwmOkaKh3-s.

Goldsmith makes a lot of strong points, and they are equally valid today.