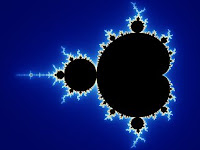 Steven Wolfram writes in the WSJ:

One might have thought that such a simple and fundamental form of regularity would have been studied for hundreds, if not thousands, of years. But it was not. In fact, it rose to prominence only over the past 30 or so years — almost entirely through the efforts of one man, the mathematician Benoit Mandelbrot, who died in 2010 just before completing this autobiography.

Armed with computer graphics, however, Mandelbrot was able to move forward, discovering in 1979 the intricate shape known as the Mandelbrot set. ... a striking example of how visual complexity can arise from simple rules.

He campaigned for the Nobel Prize in physics; later it was economics. I used to ask him why he cared so much. I pointed out that really great science — like fractals — tends to be too original for there to be prizes defined for it. But he would slough off my comments and recite some other evidence for the greatness of his achievements. ...

Mandelbrot ... once declaring that "Wolfram's 'science' is not new except when it is clearly wrong; it deserves to be completely disregarded."

Funny, I would have said that Mandelbrot's science is not new except when it is clearly wrong. A picture of the Mandelbrot set was published in 1978 before Mandelbrot discovered it. The self-similar regularity of the Koch snowflake was studied as early as 1904.

There are widely varying opinions about Mandelbrot.

Update: An American Scientist review also explains how Mandelbrot has a long history of trying to take credit for the work of others.
Posted by Roger at 8:00 AM