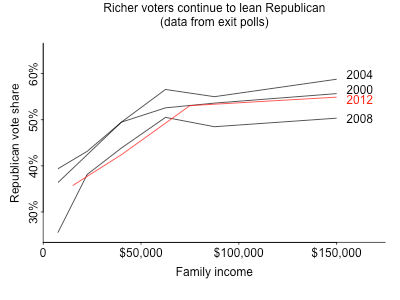 Arguably, both the Democrats and the Republicans are “the party of the rich.” But Republicans more so than Democrats (see above graph, also consider the debates over the estate tax and upper-income tax rates). ...

The paradigmatic Democratic rent-seekers are public employee unions. But they’re not generally rich, they’re middle class. Maybe teachers and bus drivers don’t deserve $80K salaries, maybe their pensions are bankrupting America, whatever. But they’re not rich people. Yes, Obama has supporters on Wall Street, as does Romney. Obama won the rich suburbs of New York. Meanwhile, Romney won the rich suburbs of Dallas. Put it all together, and upper-income Americans mostly vote Republican. Not uniformly so, and it varies a lot by region of the country (as we discuss here and in endless detail in our Red State Blue State book), but on average, yes.

He wrote a book on this subject, but if you look at the above graph, Americans over $75k are only slightly more Republican. And rich people in the major media markets like New York and California are overwhelmingly Democrat. So most of the influential rich people we hear about are Democrats.

There is not too much difference in tax policy on the rich either. Barack Obama and the Democrat Congress extended the Bush tax cuts in 2010. Mitt Romney campaigned on tax cuts for the middle class, but promised not to cut the taxes that rich people pay.

I also think that teachers and bus drivers who retire on $80K pensions are rich. Gelman teaches in Manhattan, where $80k is not a lot of money, but it is in the most of the rest of the country.
Posted by Roger at 8:00 AM

Here is the Coulter column. Yes, John Kerry is rich, but he did not earn it.