Jesus convicted of murder in Idaho 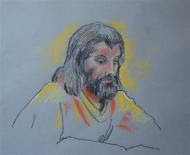 BOISE, Idaho (AP) — The crime was meticulously planned, the killer choreographing every step from his surveillance of the doomed family to the videotaped torture of one of his youngest victims.

Yet something as simple as a locked back door, or fiercer family dogs, might have turned Joseph Edward Duncan III away.

Duncan's federal sentencing hearing opened Wednesday with U.S. Attorney Thomas Moss outlining how the convicted pedophile terrorized the Groene family, all because he wanted to "live out his fantasy" and exact revenge on society for perceived wrongs.

This story is filled with weird and creep stuff. Have you ever wondered whether it would any good to lock the back door? Surely a rapist-kidnapper-child-molester-murderer would just break the lock or the window, and not be deterred by a simple door lock. But in this case:

"He made a decision: `If that back door is locked, I'm going to abort,'" Moss said Duncan later told police.

When he turned the handle, it opened. Then the terror began.

The dogs scurried away when they saw Duncan's gun, Moss said. Duncan bound the family, took the youngest children outside and beat the others to death.

Then he drove away with Dylan and Shasta, making sure they knew he had killed their relatives as he headed into the Montana wilderness.

Have you ever heard of guard dogs who were intimidated by a gun? Maybe in Idaho, where everybody has dogs and guns, the guns understand what guns can do.

Not that Duncan would hurt a dog. He liked to kill people, but not dogs:

Duncan had researched police investigation procedures and took steps to avoid getting caught, Moss told jurors. He bought too-large tennis shoes at a thrift store so no bloody footprints would lead police to him. He wiped down shotgun shells before loading them so there'd be no fingerprints. He loaded the first shot with BB pellets because he thought he'd have to shoot the family dogs and didn't necessarily want to kill them.

Duncan also refused a lawyer and insisted that the court record be accurate:

Duncan, who is representing himself, told the jury Wednesday that most of what Moss said was fair and accurate "up to the point of what occurred at the campground."

He said he would testify so he could try to "clarify things."

Perhaps most bizarre is the courtroom sketch above that makes Duncan look like Jesus. Is this some kind of sick joke?
Posted by Roger at 11:12 AM