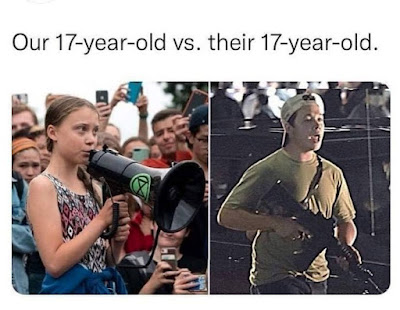 Greta is a mentally ill teenager with no substantive opinion on what to do about climate change, even though she complains about it all the time.

I am watching Kyle's trial, and I have yet to see any evidence of wrongdoing. He showed up at a riot, offering to help law enforcement or anyone needing medical assistance. A couple of deranged lunatics chased him, and tried to beat him up and take his gun. He did everything to avoid a fight, and ran away. When they got to him, he shot them.

What was he supposed to do? Run faster? Let the crazies take his gun? Assume that his attackers had good intentions?

No. If someone is chasing a guy with a gun, you have to assume that the chasers are looking to do lethal harm.

Perhaps Kyle's shooting was reckless because there were a lot of people present, and he could have hit an innocent bystander. Kyle did not appear to have the training and experience to avoid such an accident.

If Kyle had hit an innocent party, then probably a manslaughter charge would be appropriate. But he didn't. He only shot criminals who were physically attacking him and directly threatening to kill him. From what I have seen of the trial so far, it appears to be completely justified self-defense.

Also showing our cultural divide is a Neflix show:

As the first episode opens, a flurry of football players, portrayed by Black actors, are seen charging across a field in front of white coaches.

"What they don't want you to understand is what's being established is a power dynamic," Kaepernick, dressed all in black, says.

"Before they put you on the field, teams poke, prod and examine you searching for any defect that might affect your performance," he continues. "No boundary respect. No dignity left intact."

Kaepernick is not really Black. He was born to a White woman, and then adopted by a White couple. It is not known that he has any slave ancestors.

The story is about how he learned to hate White people anyway.

His football career ended after he had a very bad season, and quit.

A NY Times advice column complains about White adopting Black kids, especially if the parents believe that All Lives Matters. It suggests dishonestly befriending the family in order to teach the Black kid a racial hatred that he might not otherwise learn. It quotes a Black woman saying “As a Black community, these are our kids.” So the Black kid belongs to the Black community, not the White parents, must be instilled with Black identity.

She said Black kids adopted by non-Black families can have a hard time when their parents take a “colorblind” approach to parenting. This might look like deciding that a school is “good” based on academics alone,

Apparently, to a lot of Blacks, having an anti-White identity is more important than anything else.