Hobbit not destroying religion after all 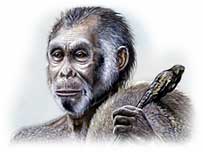 First reported in 2004, and officially named Homo floresiensis, the fossilised remains of the hobbit-like hominins were unearthed in the Liang Bua cave on the Indonesian island of Flores. Just over a metre tall, the long-lost species had elongated feet and a brain the size of a grapefruit.

The original studies of the remains and the deposits around them suggested the creatures could have lived as recently as 12,000 years ago. But new research now overturns that idea, proposing instead that our long-footed cousins disappeared at least 50,000 years ago - and hints that humans might have played a role in their demise. ...

Writing in the journal Nature, the international team of scientists have revealed that new excavations and analysis at Liang Bua date the Homo floresiensis remains to between 100,000 and 60,000 years ago, meaning that the species disappeared much earlier than previously thought.

Anthropologist Desmond Morris suggested the discovery of a human Hobbit on Flores would force many religions to examine their basic beliefs. The suggestion provoked quite a reaction.

"The existence of 'Mini-Man' should destroy religion," claims Desmond Morris.

They only ever found one skull and a few other bones. There are many controversies over the interpretation of those bones.

So you should unlearn whatever you were told about Flores Man.
Posted by Roger at 8:00 AM