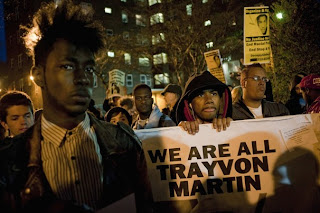 I wondered below why the Trayvon Martin advocates wanted Zimmerman arrested when he had already been arrested:

This demand is un-American because we believe that people are innocent until proven guilty, and we only punish the guilty. The Last Refuge blog argues that there is a simple monetary incentive:

Note that in section 2 of the immunity statute 776.032 a person is “immune” from criminal or CIVIL action if they are not arrested.

It is likely that Martin's family has already hired a contingency-fee lawyer to file a civil lawsuit. As I write this, Rep. Frederica Wilson (D-Florida) is giving a speech about how Martin was murdered and we need to have a national conversation about racial profiling. Pres. Barack Obama has also been pouring gasoline on the fire. I think that these Martin national conversations are going to backfire. When all the facts come out, it looks as if Martin will be proven to be the criminal, not Zimmerman. If so, and if the black community continues to defend Martin's behavior, then the public is apt to conclude that Martin was just the sort of kid who should have been profiled as someone you do not want in your neighborhood. In fairness, not all blacks are shouting racism. Bill Cosby says:

The most common black-white crime stories involve blacks beating up whites, such as this:

Maywood, Ill. - Alton L. Hayes III, a west suburban man charged with a hate crime, told police he was so upset about the Trayvon Martin case in Florida that he beat up a white man early Tuesday. Hayes and a 15-year-old Chicago boy walked up behind the 19-year-old man victim and pinned his arms to his side, police said. Hayes, 18, then picked up a large tree branch, pointed it at the man and said, “Empty your pockets, white boy.” The two allegedly rifled through the victim’s pockets, then threw him to the ground and punched him “numerous times” in the head and back before running away, police said. Hayes and the boy are black; the victim is white. After being arrested, Hayes told police he was upset by the Trayvon Martin case and beat the man up because he was white, Cook County State’s Attorney’s office spokeswoman Tandra Simonton said, citing court records.

And it may turn out that Martin beat up Zimmerman because Martin was a violent delinquent and Zimmerman was white/hispanic. For the weakness of the DA affidavit against Zimmerman, see PopeHat or Dershowitz. It gives the impression that the prosecutors are incompetent, corrupt, and have no case.

Update: More comments at TalkLeft on the weakness of the prosecution.
Posted by Roger at 3:30 PM