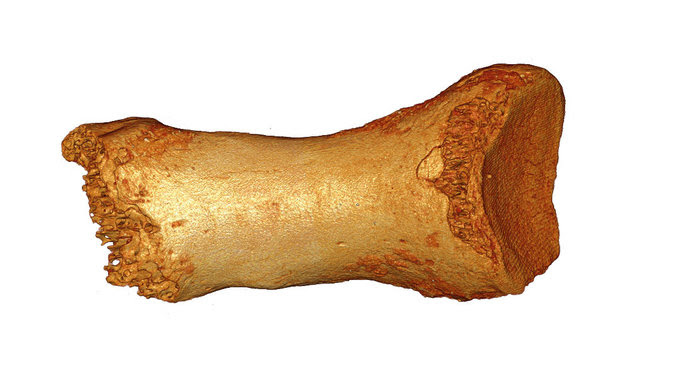 
In 1997, scientists found the first scrap of Neanderthal DNA in a fossil. Since then, they have recovered genetic material, even entire genomes, from a number of Neanderthal bones, and their investigations have yielded a remarkable surprise: Today, 1 to 2 percent of the DNA in non-African people comes from Neanderthals.

That means that Neanderthals were ancestors to today's non-Africans.


That genetic legacy is the result of interbreeding roughly 50,000 years ago between Neanderthals and the common ancestors of Europeans and Asians. Recent studies suggest that Neanderthal genes even influence human health today, contributing to conditions from allergies to depression.


Now scientists have found that the genes flowed both ways. In a study published on Wednesday in Nature, a team of scientists reports that another instance of interbreeding left Neanderthals in Siberia with chunks of human DNA.

By "human DNA", he means African DNA. The Neanderthals already had human DNA, as noted in the first paragraph.

This exchange, the scientists conclude, took place about 100,000 years ago. That’s a puzzling date, because a great deal of evidence indicates that the ancestors of today’s non-Africans did not expand out of Africa until 50,000 to 60,000 years ago.

No, the ancestors of today's non-African includes Neanderthals, and they lived outside of Africa 100k years ago.


It’s possible, then, that these Neanderthals acquired DNA from a mysterious early migration of humans.

By "humans", he means Africans.


“I think at this point we’ve convinced everybody the observation is real,” said Adam Siepel, a geneticist at Cold Spring Harbor Laboratory and a co-author of the new study. “But the story behind the observation is still very much in dispute.”

Humans and Neanderthals split from a common ancestor in Africa about 600,000 years ago. At some point afterward, the ancestors of Neanderthals spread to Europe, the Middle East and Central Asia.

The story ought to be in dispute, as it does not make any sense. Saying that "Humans and Neanderthals split" is wrong because they were all human ancestors.

The article continues with this confusing terminology.


In October, Chinese researchers discovered another intriguing clue in a cave: 47 teeth that they estimate are between 80,000 and 120,000 years old. The scientists argue that the teeth belonged to modern humans.

No, no one would say that a 120k year old tooth is from a "modern human". The argument is that the teeth came from ancient African migrants.

Maybe I am too sensitive, but there is some kind of weird racism going on here. They are claiming that only Africans are fully human, while Europeans are only partially human because their DNA has been polluted with non-human Neanderthal DNA. Africans who lived 500k years ago qualify as modern humans, but today's Europeans do not. This is crazy, and offensive. It is yet another way in which white people find it necessary to denigrate the white population.
Posted by Roger at 8:00 AM

Whose DNA are they using when comparing the modern human with earlier ancestors? Given that in reality we are all to an extent different, who gets to be the model modern human or humans, or for that matter Europeans, Asians or Africans? How many people are they using? Is it spread across many different groups, or are they random donors or what? I guess I do not know much about this stuff.

The researchers have DNA on thousands on modern people now. They are naturally catagorized according to race, with the major ones being European, East Asian, and African. Yes, some people could have slightly more or less Neanderthal DNA, but the percentages are about the same within each race.