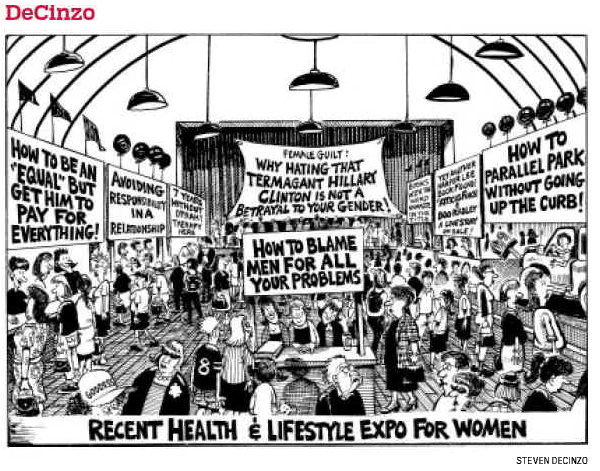 The Santa Cruz California Sentinel had this cartoon on Aug. 31, and got these letters on Sept. 3:


DeCinzo has no clue

I look forward to witty and satirical humor in the editorial section of my newspapers. Unfortunately, I have found neither wit nor satire in DeCinzo’s editorial cartoons. I am a news junkie, but I usually avoid his cartoons completely. I did happen to look at his cartoon, “Recent Health & Lifestyle Expo for Women,” and was quite surprised to find my newspaper printing such obvious misogyny. I know of no informed or educated woman thinking that a woman who achieved a Senate position and who was one of the most powerful people in the world as Secretary of State of this great nation as termagant. Maybe DeCinzo should educate himself on how many women are left without child support, have supported husbands in their education and work, and are better drivers than the average men. Either DeCinzo wants all women to remain barefoot, ignorant, and pregnant, or he is the bitter end of a divorce by a woman who couldn’t stand his chauvinism. Either way, this is one cartoonist that I will continue to skip — no humor, no depth, no clue.

I think those who have sent letters to the Sentinel objecting to DeCinzo’s “Lifestyle Expo for Women” cartoon are merely proving his point.