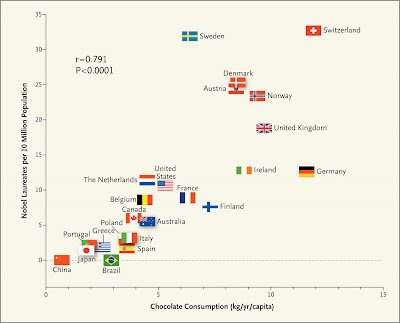 So what does it take to create a genius worthy of a Nobel? The answer may have something to do with chocolate. According to a very tongue-in-cheek report published online this week by the New England Journal of Medicine, a country's propensity for producing Nobel laureates might just be correlated to its national appetite for the sinful stuff. ...

"I have published about 800 papers in peer-reviewed journals," he says, "and every single one of them stands and falls with the p-value. And now here I find a p-value of 0.0001, and this is, to my way of thinking, a completely nonsensical relation. Unless you — or anybody else — can come up with an explanation. I've presented it to a few of my colleagues, and nobody has any thoughts."

Yes, there studies are all based on statistical p-values. Jumping to conclusions based on p-values like this is at the core of why most medical studies are not reproduced. Arguments that vegetables are good for your health are also like this.

It is not impossible that chocolate makes you smarter. One study showed:

The study also found that as the chocolate started melting, all regions of the brain received a boost far more intense and longer lasting than the excitement seen with kissing.

Here is other new research:

Here we study a potential hormonal influence, focusing on the steroid hormone testosterone, which has been shown to play an important role in social behavior. ... Our results show that testosterone administration substantially decreases lying in men. Self-serving lying occurred in both groups, however, reported payoffs were significantly lower in the testosterone group (p<0.01).

Again this seems unlikely, but there is other evidence that masculine men are more honest. Asperger syndrome is most common in boys and is a trait of masculine brains. Those with it are widely regarded as having a high degree of honesty and integrity. It is still considered a mental disorder in the DSM-IV, but the classification is being dropped in the DSM-5 for some very good reasons.
Posted by Roger at 8:00 AM