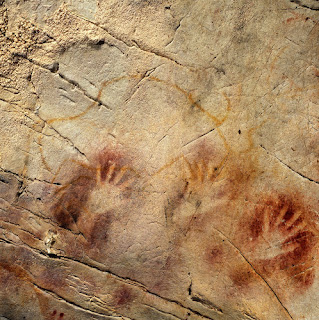 Neanderthal man has a bad reputation, even tho he had a large brain, walked upright, and contributed to modern DNA. The NY Times reports:

Stone Age artists were painting red disks, handprints, clublike symbols and geometric patterns on European cave walls long before previously thought, in some cases more than 40,000 years ago, scientists reported on Thursday, after completing more reliable dating tests that raised a possibility that Neanderthals were the artists. ...

The third possibility, which the scientists said they had not anticipated at the start of their project, is that some of these earliest works of cave art might be attributed to Neanderthals. Until recently, archaeologists usually considered Neanderthals incapable of creating artistic works much beyond simple abstract markings and personal ornamentation.

Cave painting wouldn’t be the first sign of Neandertal sophistication. In recent years scientists have unearthed quite a few signs that our oft-maligned cousins were aesthetes. Archaeological evidence indicates that they made jewelry from teeth and shells, festooned themselves with feathers, and painted their skin. If they were decorating their bodies with symbols, many experts say, they almost certainly had language. In fact, anatomically modern humans and Neandertals might have inherited their capacity for symbolic thinking from their common ancestor. If so, the roots of our symbolic culture go back half a million years.

NPR denies that Neanderthals were human:

Alistair Pike, an archaeologist at the University of Bristol in England who used a novel technique to get new dates for some of those paintings, says they're older than people thought, and they may just predate the arrival of humans in Europe.

It is now common to say that humans are ape, because of DNA similarities, so it is a little strange to say that Neanderthals were not human.
Posted by Roger at 8:00 AM

"Neanderthals were members of a now-extinct species, or species sub-group,[1] closely related to modern humans that is known from Pleistocene specimens found in Europe and parts of western and central Asia."