The Scream and other icons 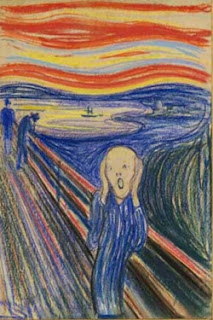 “The Scream” by Edvard Munch broke the world record for priciest artwork sold at auction yesterday, fetching $119.9 million at Sotheby’s in New York City. ... Munch’s painting is ranked in global polls as the second-most identifiable icon, after the“Mona Lisa” and before Che Guevara’s face.

Che? Is that a joke? Here is what a Russian immigrant professor says about him:

Che Guevara is one of the few communist leaders who still has a broad following in the West. Go to any college campus or hip neighborhood and you’ll see plenty of Che T-shirts, Che posters, and even the occasional Che cell phone message. This is extremely unfortunate, since Che was in fact a brutal mass murderer and terrorist, ...

Wow, I would not have guessed that he is so widely recognized.

Osama Bin Laden and Mao Tse-tung also have widely recognized images, but they are recognized as evil leaders. What is Che recognized for? Do all those people know what a criminal he was?
Posted by Roger at 8:00 AM

Che is widely recognized in the UK by baby boomers, but I'm not sure about younger generations.

Whether people also know what he was, I'm not so sure.