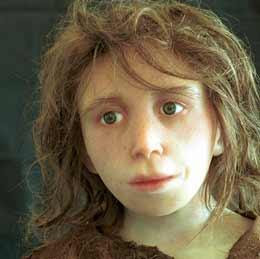 Here is a picture of the latest missing link, a Neanderthal half-breed. Nature reports:

Archaic humans such as Neanderthals may be gone but they're not forgotten — at least not in the human genome. A genetic analysis of nearly 2,000 people from around the world indicates that such extinct species interbred with the ancestors of modern humans twice, leaving their genes within the DNA of people today.

The theory is that today's Europeans are descended from people who migrated out of Africa and then interbred with Neanderthals. Sounds dubious to me, but I am sure we will hear more about this. There is current a project to sequence the Neanderthal genome, and we should be hearing some results soon.

There is also a far-fetched theory that autism is caused by Neanderthal genes. The article suggests testing the theory by seeing whether autistic kids have a natural ability to recognize Neanderthal faces better than human faces.
Posted by Roger at 11:10 AM