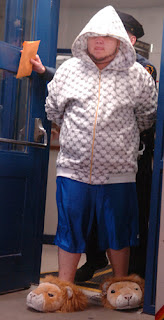 Here is a Penn. story:

Torres was driving on Turner Street Friday afternoon when he was pulled over by police and arrested. He was wearing a hooded sweartshirt with a skull-head pattern on it, pajama bottoms and fuzzy lion-faced slippers at the time. He was still wearing the get-up when he was arraigned after midnight at Lehigh County prison. ...

Police have not said how they came to suspect Torres in the shooting deaths of Carlos Collazo, 32, and Jorge Camacho, 36, both of Allentown. But in an affidavit filed in court, police said Torres told them that he and another man had been looking for Collazo and Camacho, and that Torres admitted to killing both.

The cops probably decided that Torres's appearance matched the profile of a murderer. Lock him up!
Posted by Roger at 7:37 PM