Here is an amusing cartoon. 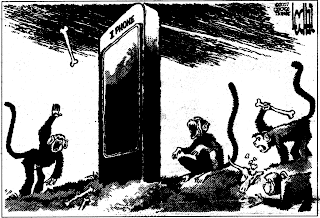 The reference is to the movie 2001, where apes are inspired to fight with weapons by discovering a monolith.

As far as I can tell, the Apple iPhone only offers one novel feature -- the ability to listen to voicemail message out of order. Everything else has been available from other vendors for years. Some phones offer fancier features like GPS, much better cameras, keyboards, Java, Flash, 3rd-party apps, extra memory, etc. And of course the iPhone is crippled, like other Apple products.

There is someone claiming to have figured out how to unlock the iPhone so that it can be used with T-Mobile's network, and he wants to sell unlocked iPhones. But even if you could get such a phone, you would not be able to listen to your voicemail messages out of order, so I doubt that it would interest the typical Apple customer.
Posted by Roger at 12:46 AM

you are a moron.