Americans are WEIRD, and proud of it 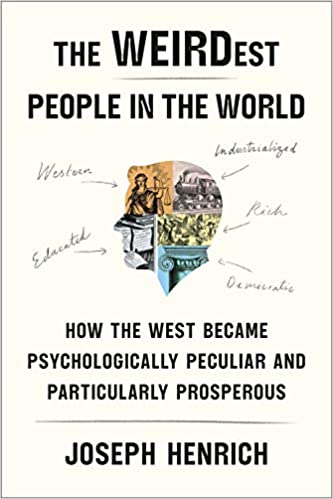 
The target of the weird label was Western people. More specifically, Western, Educated, Industrialized, Rich, and Democratic, or WEIRD.


WEIRD was not meant as a pejorative, but as an apt description of this group of psychologically peculiar people, who are distinct from the majority of humanity both now and throughout human history.


Indeed, WEIRD individuals are psychologically peculiar in a number of ways. For instance, if asked the question, “Who are you?” WEIRD people are more likely to describe themselves in terms of their skills, occupation, achievements, and talents rather than by their relationships — they are “a doctor,” “hardworking,” or “a pianist” rather than “Alex’s son” or “Clara’s boyfriend.” Additionally, when judging others, they are typically more likely to assign responsibility to personal characteristics rather than external circumstances. For instance, they are likely to assume that the guy driving recklessly ahead of them on the highway is a complete idiot and terrible driver rather than a worried son rushing his father to the nearest emergency room. While WEIRD people are more individualistic, self-centered, impersonally prosocial, guilt-ridden, and analytical, many non-WEIRD people, from the Chinese to the Ju/’hoansi of the Kalahari Desert, display opposite psychological trends. Non-WEIRD people tend to be more collectivistic, other-focused, more partial to their in-groups, shame-ridden, and holistic thinkers.

The central argument of Henrich and his collaborators is that there has been and continues to be an over-reliance on WEIRD samples in research.

That's right. The WEIRD folks are unlikely to describe themselves as normal White Christian Americans, which is what they really are.
They are also unlikely to realize how different the folks from the rest of the world are. Even when immigrants come to America and their kids grow up in American, they still usually retain these non-WEIRD differences.


Henrich takes this approach especially when he argues that the origins of WEIRD psychology began with the fall of the Western Roman Empire and the rise of the branch of Christianity that later evolved into the Roman Catholic Church, which he calls the “Western Church.” During the period between about 400 and 1200 CE, the Western Church began gradually dismantling intensive kin-based institutions such as clans, kindreds, and segmentary lineages, which were typical of most human societies then and throughout human history. With the disbanding of these institutions came the outlawing of norms associated with them such as polygamy and cousin marriage. The Western Church began promulgating a new set of prescriptions dealing with marriage, family, identity, and inheritance, which Henrich collectively refers to as the Marriage and Family Program (MFP). The MFP inadvertently encouraged the creation of associations such as guilds, universities, and confraternities, which bound people together based on shared interests, beliefs, and skills, rather than kinship ties.

Henrich argues that the rise of these more non-relational institutions in Europe created a novel environment to which these populations psychologically adapted. This cultural adaptation strongly influenced the psychology typical of WEIRD people today.

Right again. Everybody knows about the influence of the ancient Greeks and Romans, and about the European Rennaissance, Enlightenment, and Industrial Revolution. These things shaped Western Civilization as we know it. But perhaps just as important were the developments in Northwestern Europe from 400 to 1200 AD. They made the modern world possible.
Posted by Roger at 6:00 AM

Email ThisBlogThis!Share to TwitterShare to FacebookShare to Pinterest
Labels: Americanism