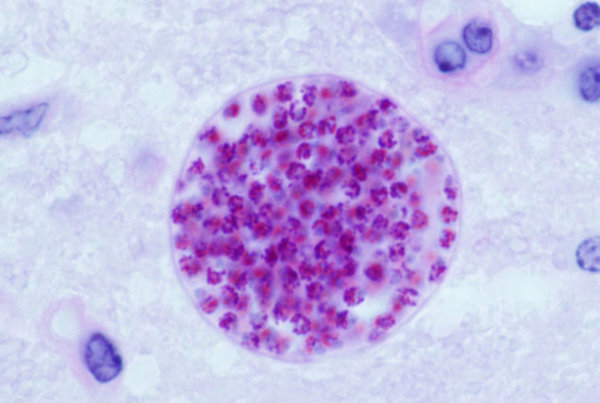 Ever notice how cat owners seem to be under the spell of some sort of mind control that makes them completely irrational about some things? Some new research has shown how this works:


An unassuming single-celled organism called Toxoplasma gondii is one of the most successful parasites on Earth, infecting an estimated 11 percent of Americans and perhaps half of all people worldwide. It’s just as prevalent in many other species of mammals and birds. In a recent study in Ohio, scientists found the parasite in three-quarters of the white-tailed deer they studied.

One reason for Toxoplasma’s success is its ability to manipulate its hosts. The parasite can influence their behavior, so much so that hosts can put themselves at risk of death. Scientists first discovered this strange mind control in the 1990s, but it’s been hard to figure out how they manage it. Now a new study suggests that Toxoplasma can turn its host’s genes on and off — and it’s possible other parasites use this strategy, too.

Toxoplasma manipulates its hosts to complete its life cycle. Although it can infect any mammal or bird, it can reproduce only inside of a cat. The parasites produce cysts that get passed out of the cat with its feces; once in the soil, the cysts infect new hosts.

Toxoplasma returns to cats via their prey. But a host like a rat has evolved to avoid cats as much as possible, taking evasive action from the very moment it smells feline odor.

Experiments on rats and mice have shown that Toxoplasma alters their response to cat smells. Many infected rodents lose their natural fear of the scent. Some even seem to be attracted to it.

And if your behavior is not driven by cat parasites, then it is probably your genes:

“There is now a large body of evidence that supports the conclusion that individual differences in most, if not all, reliably measured psychological traits, normal and abnormal, are substantively influenced by genetic factors. This fact has important implications for research and theory building in psychology, as evidence of genetic influence unleashes a cascade of questions regarding the sources of variance in such traits. A brief list of those questions is provided, and representative findings regarding genetic and environmental influences are presented for the domains of personality, intelligence, psychological interests, psychiatric illnesses, and social attitudes. These findings are consistent with those reported for the traits of other species and for many human physical traits, suggesting that they may represent a general biological phenomenon.”