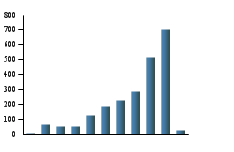 I think it's rare to see an outright lie, especially about a really major issue. We had a doozy yesterday, when Congresswoman Michelle Bachmann presented a graphic that attributed the 2009 federal budget to the Obama administration. Oddly, most of the other facts and figures she presented were correct, ...

I don't know who Phil Price is. I read the blog because all the regular entries are written by an expert statistician with useful insights. His opinions on charts is excellent. Price is misreading the graph and putting out a DailyKos style partisan political attack.

The graphic does not attribute the 2009 federal budget to the Obama. As Price later admits, it is common knowledge that many budget decisions are made far in advance. The chart merely shows the annual deficits, and labels them with the administrations in which the deficits occurred.

Bachmann's point is to show that the deficits have gotten much worse in the last two years, and she is correct.

By comparison, I have shown above a chart of USA casualties in Afghanistan. As you can see, it is going up just like the deficit! It would be completely fair and accurate to label the last two years as being during the Obama administration, even tho some of the deaths are attributable to continuing policies that begun under Bush.

The budget deficit in any given year is almost entirely determined by votes that took place several months earlier.

Yes, of course budgets are based on advance planning. Everybody knows that. But the Bachmann chart shows actual deficits, not the proposed budget deficits. Price is wrong.

Update: A reader sends these definitions of lying. I am not accusing Price of lying because it is not clear that he understands the difference between a proposed deficit and an actual deficit, and a fiscal year and a calendar year. It also is not clear that he understands that people often state facts without attributing blame, and that making a statement about someone's intentions requires some mindreading. I just point out that Price is wrong because he attributes to Bachmann something that she did say, that she did not imply, and that is not a part of her message.
Posted by Roger at 2:00 PM