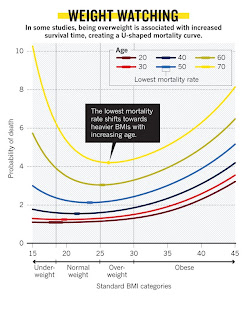 
The report, a meta-analysis of 97 studies including 2.88 million people, had been released on 2 January in the Journal of the American Medical Association (JAMA)1. A team led by Katherine Flegal, an epidemiologist at the National Center for Health Statistics in Hyattsville, Maryland, reported that people deemed 'overweight' by international standards were 6% less likely to die than were those of 'normal' weight over the same time period.

The result seemed to counter decades of advice to avoid even modest weight gain, provoking coverage in most major news outlets — and a hostile backlash from some public-health experts. “This study is really a pile of rubbish, and no one should waste their time reading it,” said Walter Willett, a leading nutrition and epidemiology researcher at the Harvard school, in a radio interview. Willett later organized the Harvard symposium — where speakers lined up to critique Flegal's study — to counteract that coverage and highlight what he and his colleagues saw as problems with the paper. “The Flegal paper was so flawed, so misleading and so confusing to so many people, we thought it really would be important to dig down more deeply,” Willett says.

But many researchers accept Flegal's results and see them as just the latest report illustrating what is known as the obesity paradox. Being overweight increases a person's risk of diabetes, heart disease, cancer and many other chronic illnesses. But these studies suggest that for some people — particularly those who are middle-aged or older, or already sick — a bit of extra weight is not particularly harmful, and may even be helpful. (Being so overweight as to be classed obese, however, is almost always associated with poor health outcomes.) ...

Public-health experts, including Willett, have spent decades emphasizing the risks of carrying excess weight. Studies such as Flegal's are dangerous, Willett says, because they could confuse the public and doctors, and undermine public policies to curb rising obesity rates. “There is going to be some percentage of physicians who will not counsel an overweight patient because of this,” he says. Worse, he says, these findings can be hijacked by powerful special-interest groups, such as the soft-drink and food lobbies, to influence policy-makers.

So leading nutritionists like Willett will lie to you about food science, because they do not want to undermine their pet public policies or help the food lobby.

A lot of professional athletes have a BMI of around 26. It seems crazy for experts like Willett to argue that there is something wrong with that.
Posted by Roger at 8:00 AM