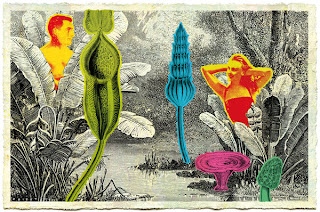 Someone named Dan Slater recently wrote a book, Love in the Time of Algorithms, and has an op-ed out titled Darwin Was Wrong About Dating
. The piece is littered with generally unpersuasive refutations of the relevance of a Darwinian framework in understanding the evolutionary origins of human behavior.

It turns out you can deny evolution and still get published on the New York Times op-ed page. Dan Slater did just that, in a piece yesterday called "Darwin Was Wrong About Dating."

Slater -- who has a new book out in which he claims that online dating, of all things, is revolutionizing the sexual marketplace--sets out to debunk a subspecialty known as evolutionary psychology, which seeks to explain differences between men and women in terms of Darwin's theory of sexual selection. ...

It is crucial to understand that these are only metaphorical "strategies" and that evolutionary "interests"--the interests of one's genes--are not the same as individual interests. Evolutionary psychology posits not that men decide to be promiscuous and women hypergamous because they want to have as many or as robust children as possible, but that these sexual and emotional instincts developed because they were conducive to reproduction over many generations in the ancestral environment.

The Slater article has other flaws. It says:

In 1972, Robert L. Trivers, ... argued that women are more selective about whom they mate with because they’re biologically obliged to invest more in offspring. ...

One of the earliest critics of this kind of thinking was Stephen Jay Gould. ...

In 2009, another long-assumed gender difference in mating — that women are choosier than men — also came under siege. ...

Recently, a third pillar appeared to fall. To back up the assumption that an enormous gap exists between men’s and women’s attitudes toward casual sex, evolutionary psychologists typically cite a classic study published in 1989.

No, these pillars are not falling. Women are more selective and men more interested in casual sex for the obvious evolutionary reasons. It is remarkable to see the NY Times deny basic human nature and evolution.
Posted by Roger at 8:00 AM