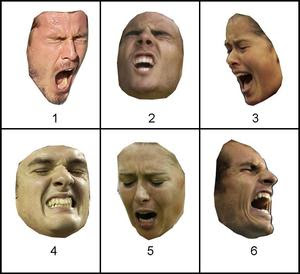 "When I look at a sports magazine, and I see the full picture of a person winning a point, and he has his full gesture, the whole picture makes perfect sense to me," says Aviezer. "The face looks like a victorious face, and the body looks victorious; everything together seems to make perfect sense."

But that sense of certainty disappeared, he found, when he took images of tennis winners and losers, and erased everything but the face. When he showed just those isolated faces to people, they couldn't tell if something positive or negative was going on.

"This was really a very striking finding," says Aviezer.

Then he showed people images of tennis players with the faces erased. People had to judge winners from losers based solely on the rest of the body. "And when people saw the body alone, they easily knew if this was a positive or negative emotion," explains Aviezer.

This is counterintuitive, he says, because people usually assume that if they are getting an emotional message, it must come from the facial expression.

A lot of people attach great importance to reading facial expressions. But usually the face just confirms much more precise voice info. This study shows faces can be unreliable.

If someone in your field of view experiences a sudden happy thought or a wave of anger, you do not need to be told. You just seem to know. Of course, this ability is not based on psychic powers but on the reading of small clues: a distinctive curl of the lips for joy, a clenching of the jaw for pique. ... we are remarkably skilled at imagining the mental lives of others.

At the Massachusetts Institute of Technology, Rebecca Saxe, 33, is part of a scientific movement to better understand this ability, known as theory of mind. Saxe established that there is a single location in the brain, the right temporoparietal junction, where this thinking is centered. ... this little section of brain, just behind the right ear, drives much of what we associate with humanity—conversation, friendship, love, empathy, morality. And art: theory of mind is why humans write novels and why they read them.