The cleric, Saleh al-Fawzan, recently issued a fatwa through a kingdom-based Quranic TV station prohibiting open buffets, saying that the value and quantity of what is sold should be pre-determined before it is purchased.

“Whoever enters the buffet and eats for 10 or 50 riyals without deciding the quantity they will eat is violating Sharia (Islamic) law,” said Fawzan on al-Atheer channel.

I am adding this to my list of reasons to avoid Islamic law.

I am happy to say that you can still eat burgers like this in America. 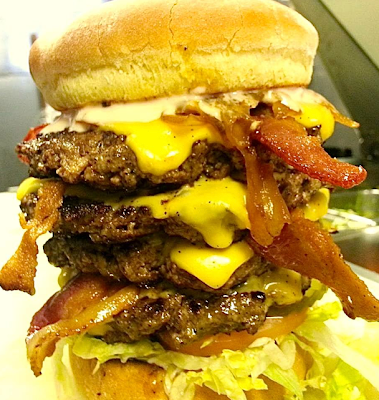 While we don't have fatwas, you might get cheated on a large beer at a hockey game:

When the couple attended an Idaho Steelheads minor league hockey game in Boise’s CenturyLink Arena, they found that the ‘regular’ size beer they bought actually held the same volume of brew as the ‘large’ size. They decided to shoot and post a video demonstrating that the $4 regular beer (listed as 16 oz.) nearly filled the entire $7 large beer cup (listed as 20 oz.). In the video Gibbs can be heard off camera saying, “It’s the same beer. Seven dollars, you just get a taller cup.”

Update: A lawyer is now seeking a class-action lawsuit over the beer cups having the same beer.
Posted by Roger at 8:00 AM