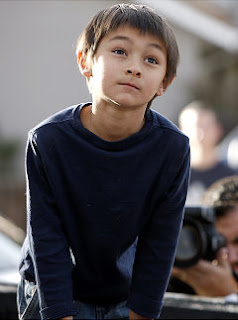 The couple who wanted America to believe that their 6-year-old son, Falcon, was adrift in a runaway balloon both were sentenced to jail time for crafting a hoax that first captivated then horrified the nation. ...

He was also slapped with four years of probation, during which time he is not allowed to profit in any way for his ill-intentioned scheme, meaning no book deals or media interviews. He must perform 100 hours of community service a year for the duration of his term, write a letter of apology to community and public agencies and submit to random drug and alcohol testing.

Finally, he must pay full restitution for the state and federal forces marshalled in the rescue effort that wasn't. That amount still needs needs to be determined.

To enforce that ruling, Schapanski ordered the couple to submit quarterly financial disclosures for the duration of their probation.

This is unamerican. Americans ought to have an inalienable right to make money off of publicity stunts. Cash-starved publicity seekers made America great.

The only expense this couple caused was maybe the price of binoculars to see what was going on. That should have been enough to see that there was no boy in the balloon. Heene sought his publicity by calling the local TV station, not 911.

This couple had to make a plea bargain because the wife was threatened with deportation and the kids were threatened with foster care. So they pled guilty. I think that someone should give them a medal for entertaining the country.

All Americans have a fundamental right to write a book and tell their story. All except the Heenes and a few murderers.
Posted by Roger at 12:31 PM