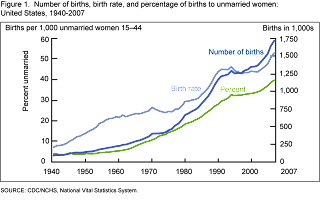 The AP reports from this CDC report:

ATLANTA—The percentage of births to unmarried women in the United States has been rising sharply, but it's way behind Northern European countries, a new U.S. report on births shows.

Iceland is the leader with 6 in 10 births occurring among unmarried women. About half of all births in Sweden and Norway are to unwed moms, while in the U.S., it's about 40 percent. ...

Experts are not certain what's causing the trend but say there seems to be greater social acceptance of having children outside of marriage.

According to the CDC data, the rate for Mexican-American unmarried women is about triple the rate for white women, and the rates for blacks is about double. The moms are not teenagers anymore.

The reasons are not so mysterious. Our society has created a long list of incentives for out-of-wedlock births in the last 50 years.
Posted by Roger at 10:50 AM